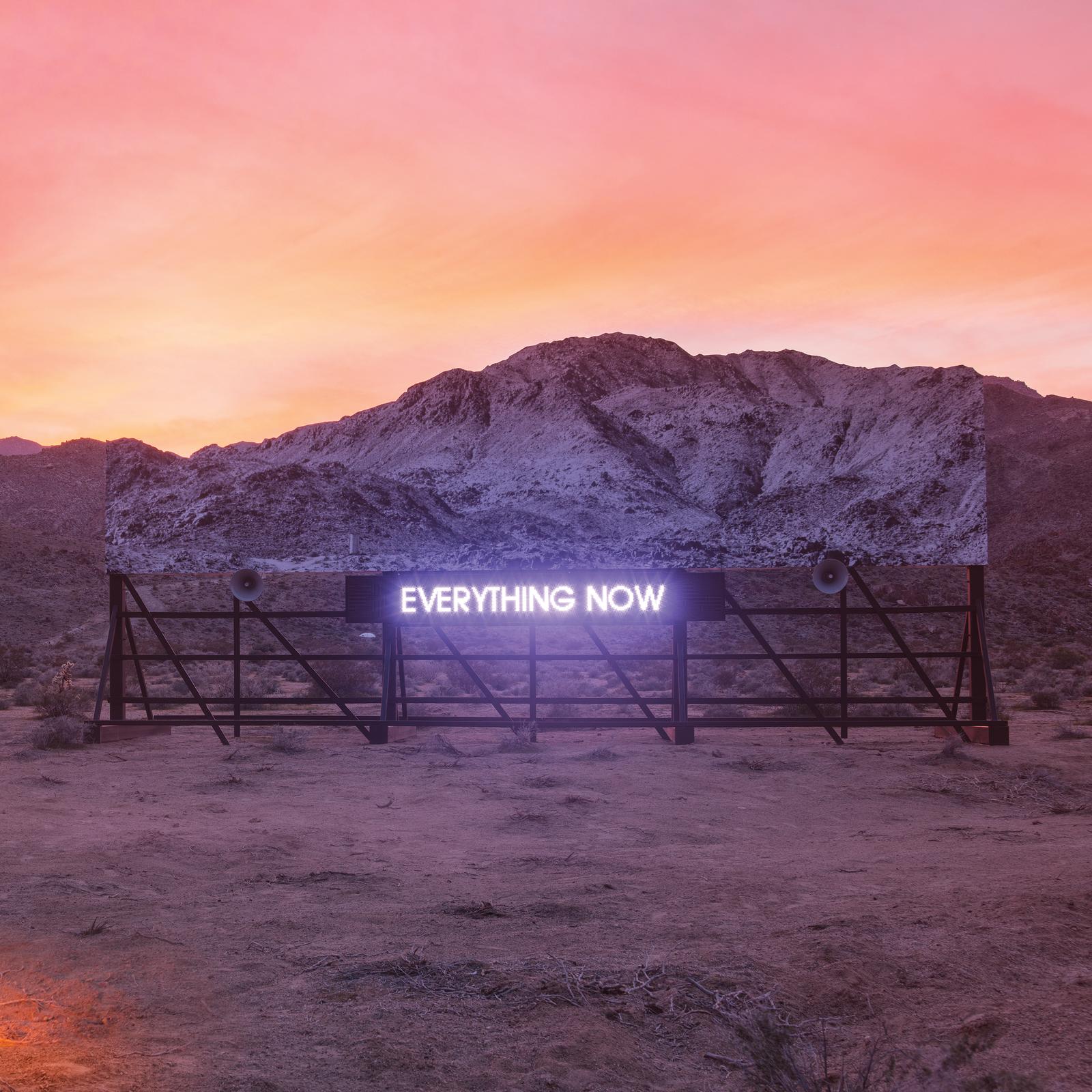 After four long years away, Arcade Fire’s latest evolution has a distinct disco kick to it. Full of more electronic-elements than ever before, the band is pushing themselves deep into new territories while pulling back in the song writing strengths that made their earlier work soar. Going a bit more long-form and perhaps repetitive at times, the band has churned out some of their finest singles in a long time while only seemingly stumbling a little.

Tearing open on a Beatles-esque symphonic build up, “Everything Now” starts as epic as you’d expect. The immediately catchy piano hook, complemented by Win Butler’s vocals lays into the groove wholeheartedly. With chorus chants, dynamic instrumental crashes and even some pan flute, they open up the album epically. “Signs Of Life” takes its bass and claps to immerse itself in the disco beats. With sax and distinct tone of fun (most notably in Win’s day name-off) the track is immediately infectious, proving to be one of best dance tracks of the record, and a sure killer live.

Falling into some heavy electronica and bass beats, “Creature Comfort” has one of the deepest feelings sonically with layered tones of the instrumentation. The extremely dark tone matches the lyrics about suicide and image, with the clearly personal tones giving the song a more intense weight to it. “Peter Pan” shifts to reggae tones with overpowering bass and synth tones, while tweaking the melody lines into a gross slides. The excited vocals that mix Peter Pan with more metaphorical cries of love elevate what is ostensibly a less powerful track than the opening singles present.

“Chemistry” while not immediately grabbing, slowly evolves into one of those euphoric party tracks, pulling heavy inspiration from the streets of New Orleans. As the horns, heavy bass and drums, distorted guitars and even harmonies filter in, the track takes on a mantra and takes on the same quirky fun of some of Paul McCartney’s weirder singles. Using all this, along with some huge drum hooks, the track will definitely grow on listeners over time.

Thrashing harder than the band ever has, “Infinite Content” is a fast, overdriven, sarcastic shriek full of weird crumbling distortion and warbled string arrangements. The final melodic hooks bring so much satisfaction out of the mess it’s almost bliss. Clearly having a bit of fun on the more Southern styled “Infinite_Content,” they still manage to infuse a lot of great instrumental arrangements on what is essentially a country b-side with some heavy Suburbs overtones.

“Electric Blue” hits even harder on record, with its pounding drums and drowning bass providing a perfect contrast to Régine’s vocals. Falling back into the disco tones, the guitars jangle, and the vocals (along with the weird samples) dance along the grooves in a classic way. Spinning the bass and guitar into something more sombre, “Good God Damn” takes in the other side of the life-ending conversation, looking at it spiritually. While it’s crafts its mood elegantly and has one of coolest synths on the record, the simple arrangement will definitely leave you craving more.

Switching to electronic dance tones, “Put Your Money On Me” feels totally unique in its sonic density. Full of tangible life and layers, the track feels like it has a shifting core in its running sequencer. The joyous chorus chant has endless excitement in its swell, and the touches of strings that play over the piles of synth makes for a stirring listen. With its growing finale, this one is sure to be one of the deep-cut favourites of the record. Closing on the downbeat tones of “We Don’t Deserve Love” the band seemingly go out with a fizzle before their anthemic chorus rings through, albeit almost three minutes deep into the song. Perhaps burning a little too slow, the majestic soaring feeling is there all the same, and it ends the album on inspiring tones before the overture of “Everything Now (continued)” gives us one last curtain on the release.

While there are enough down moments on Everything Now to make many Arcade Fire fans scream they’ve lost their touch, it’s altogether a much more cohesive and tight record than Reflektor. Next to some of the utterly divine highs, anything but inherently feels low regardless of actual quality. As a band evolving, it’s great to see Arcade Fire moving forward while noting the key aspects that have always made them shine.