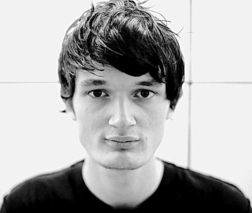 Apparat, aka Sascha Ring, will release Krieg und Frieden (Music for Theatre), an album of music based on Sebastian Hartmann’s theatre production of Tolstoy’s War & Peace, next Tuesday, February 19th.

Featuring artwork by Tilo Baumgärtel, whose work forms part of the theatre production, Krieg und Frieden was recorded with Philipp Timm (cello) and Christoph Hartmann (violin), who form part of Apparat’s live band.The project was initially conceived to end with the last performance of the play, and no release was ever imagined. As the production drew to an end, they found they hadn’t fully exhausted the potential of the songs yet.“Because it evolved out of a process, and transformed all the time, there’s always been a certain freshness to it.” explains Ring.