The Antlers to tour with Death Cab For Cutie 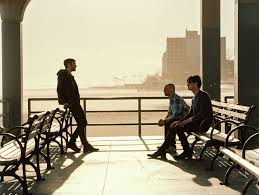 Brooklyn avant-moodists The Antlers will be joining Death Cab For Cutie for a series of North American live dates beginning this April. The group will be playing in support of their new album Familiars.

Familiars is the latest genre defying work from The Antlers. The record was recorded, engineered and produced by the band in their Brooklyn studio and mixed by Chris Coady (Yeah Yeah Yeahs, TV on the Radio, Beach House) at DNA Downtown Studios.

The Antlers are Peter Silberman, Darby Cicci and Michael Lerner. Silberman founded The Antlers in 2006 as a solo project and released two bedroom-recorded LPs before enlisting Cicci and Lerner to round out the group. As a trio they recorded and released 2009’s breakout Hospice and Burst Apart, as well as the 2012 EP Undersea.