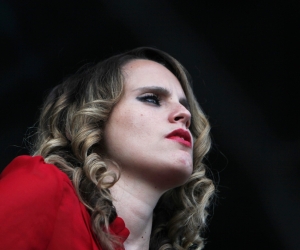 Anna Calvi has shared a breathtaking new video for her forthcoming single, Eliza, directed by Emma Nathan. Watch it above.

Eliza will be released as the first single from Anna Calvi’s new album, One Breath, on 7th October 2013. Striking a delicate balance between optimism and despair, the soaring Eliza is about “seeing a strong and beautiful woman who reminds you of a part of yourself that has got lost somehow, and striving to become that person again” – Anna Calvi.

Anna Calvi will be performing her new album in a handful of intimate venues in London, Milan, Paris and Berlin this September. The London show (which is now sold out) will take place at Wilton’s Music Hall on September 12th. She will then be performing across Europe and the US until the end of the year, with an album launch show at the Islington Assembly Hall in London on October 8th (also sold out).  She will return to London to play The Troxy on 8th February 2014.  Full dates are as follows: