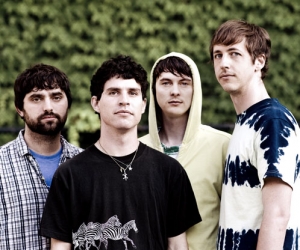 Today, Animal Collective has debuted their latest video for “Monkey Riches,” via The Creators Project. “Monkey Riches” is the latest single from their 2012 experimental opus, Centipede Hz. Directed by Jack Kubizne, who previously directed the band’s video for “Brother Sport,” the video can be seen above and an interview with the director can be read on The Creators Project website.

The band has also announced the rescheduled dates for their postponed July shows for this winter. In addition to these rescheduled dates, Animal Collective has added an additional Washington D.C. date at the 9:30 Club. Fans who attended Animal Collective’s 9:30 Club that was canceled due a to power outage will have first opportunity to buy tickets for the show via an email sent to all previous ticket holders.

The band will kick of their latest dates at MusicFestNW in Portland on September 6th. The band will also be play headline shows in Los Angeles, Chicago, Philadelphia, and more, as well as festival dates at Treasure Island Festival, Mountain Oasis Music Summit, and Cerimonia Festival in Mexico City. Full dates below. Animal Collective will once again bring their impressive stage show on tour, which was aptly described by Pitchfork as “giant, gap-toothed Nickelodeon dentures on either side, a curved inflatable structure that resembled scorpion tails dipped in PAAS dye, a centralized TV running constant, blaring images. Basically, the cover of Centipede Hz gone widescreen.”