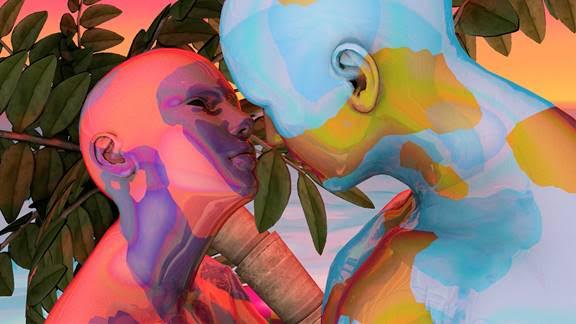 Animal Collective has premiered the video for new single ‘FloriDada’, off the forthcoming album Painting With, out February 19 on Domino.

The video – an alien love story, touchingly human and awash in Technicolor – was produced and directed by PFFR (Adult Swim; Delocated; The Heart, She Holler). The video will have its television premiere tomorrow night, Saturday Jan 9, on Adult Swim during the Toonami block of programming (midnight to 6am Sun EST).

Painting With will be available in standard CD, LP, and a deluxe LP + 7”+ zoetropic turntable slipmat formats. The album in CD and LP formats will be available in three different covers, featuring each Animal Collective member – Avey Tare, Geologist, and Panda Bear – as painted by Brian DeGraw. The deluxe LP + 7”+ turntable slipmat format exclusively available via the Animal Collective and Domino webstores includes a choice of one of the three covers, in addition to a limited edition 7” featuring two exclusive non-album tracks mailed at a later date, and a slipmat that animates when activated in part with a strobe light.

* with Ratking
^ with GFOTY
+ with Kaitlyn Aurelia Smith