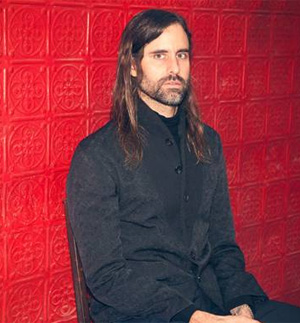 Grammy-nominated artist Andrew Wyatt, better known to most as the front man of revered electronic pop group Miike Snow, has released a documentary providing a compelling look into the aesthetic and process of making his forthcoming debut solo album Descender – out May 6th on Downtown Records.

More than just a Web episode, this documentary directed by Sebastian Mlynarski, spotlights Wyatt’s unique versatility as a songwriter and is released in collaboration with The Creators Project. Aptly named “Descender,” it provides a distinct peak within Wyatt’s music career – his work with artists like Carl Barat and Mark Ronson, his time in Miike Snow, his studies in classical conservatory (which spawned his collaboration with the 75-piece Prague Philharmonic on the album), and the experiences that lead to his growth as a songwriter.

This documentary is beautiful in its direction and style, encompassing what it is to be human in an incredible world while displaying a humbleness that makes it easy to relate with Andrew, his music and his struggles.

The documentary, which also previews songs from the new album Descender – Andrew Wyatt’s first solo effort including cameos from Anthony Rossomando of The Libertines, Brad Traux (formerly of Interpol) and John Herndon of Tortoise, starts in New York City where we find that Wyatt gives himself just one month to record the album.

Upon booking the orchestra and sending the transcribed music, he finds that his transcriptions were rather unusual to the orchestral musicians. “I have serious concerns and worries. If we make parts from these scores, nobody will be able to read them. Maybe we should put these sessions off,” says the orchestra conductor.

And so begins the documentary, taking us through the streets of Prague and into the recording studio. It also stops in Kutna Hora, which is home to a small Roman Catholic chapel located beneath the Cemetery Church of All Saints, called Kostnice Ossuary, that contains the skeletons of between 40,000 and 70,000 people whose bones have been artistically arranged to form decorations and furnishings for the chapel. It is here that Andrew reflects on the album as being “the ruins of my grand ideas.”

The Creators Project is an ongoing global initiative by VICE and Intel, dedicated to supporting artists in realizing their creative visions through technology. Since 2010 there have been over 300 Creators involved in the project hailing form all over the world. Participating Creators include Florence and the Machine, Karen O, Mark Ronson and now Andrew Wyatt among others.