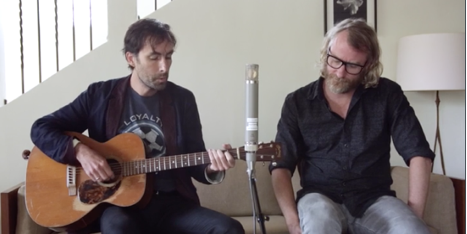 Andrew Bird recently teamed up with The National’s Matt Berninger to cover the Velvet Underground classic “Perfect Day” for Bird’s Facebook Live series, “Live from the Great Room.” Streamed live from Bird’s living room, the weekly series puts the creative process on display for fans as Bird performs and converses with friends and collaborators in a candid, intimate setting.

Bird is currently on tour in Europe, with upcoming performances in Italy, Spain and Portugal. Upon his return to the U.S. he is set to reprise his intimate, solo Gezelligheid performances this winter for a three-night residency at Chicago’s Fourth Presbyterian Church December 14-16.

The Gezelligheid performances will follow Bird’s upcoming shows at the Tarrytown Music Hall on December 10 and he’ll cap the year off with a special performance at New York City’s Carnegie Hall on December 12, playing music from his new album, Are You Serious as well as material from his career.

Bird also recently partnered with gun safety group Everytown For Gun Safety and actor/director Natalie Morales (best known for her acting work on FOX’s “The Grinder,” NBC’s “Parks and Recreation” and HBO’s “Girls,” as well as for directing videos for singer-songwriter Holly Miranda, bands The Georgia Sand and Killmama, and Funny or Die) for a video collaboration that takes a powerful look at a day in the life of an American kid, where lockdown drills are now a sad and regular reality in their daily routine.

Chicago-based film score composer, multi-instrumentalist and lyricist, Andrew Bird picked up his first violin at the age of four and spent his formative years soaking up classical repertoire completely by ear. As a teen Bird became interested in a variety of styles including early jazz, country blues and gypsy music, synthesizing them into his unique brand of pop. Since beginning his recording career in 1997, he has released 12 albums, his first solo record Weather Systems coming in 2003.

*Gezelligheid
†with The Lumineers