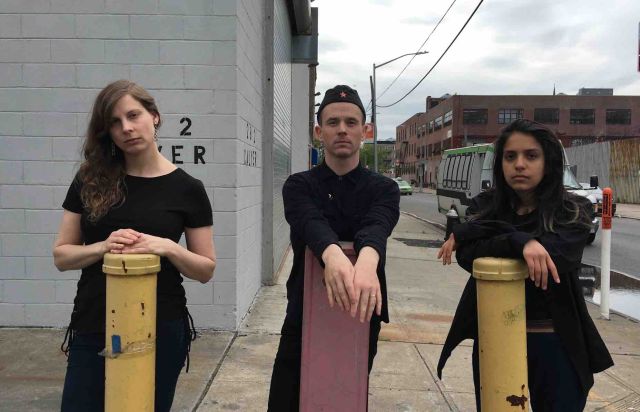 Hardcore antifolk band American Anymen slams its fist into the corrupt and
broken down institutions of the USA, targeting both the extreme right-wing
and liberal left in its blunt and bludgeoning song, and video for, “Selectively
Stupid”. The track comes off of the band’s upcoming 11th album, Start My
Center.

While the music hits the listener head-on, it’s the raging vocal and lyrics
vitriol that strikes the target dead-on. Sullivan and company have a raw
and uncompromising view on political, economic, and social issues, which
they tackle on the scathing and profanity-filled “Selectively Stupid”.

The video is part-lyrics print-out and part-real life footage that spotlights
police brutality (with a white cop slamming a black girl to the ground) and
iconic Republican figures like George W. Bush, Ronald Reagan , and
Donald Trump (Well, the jury’s out on him). American Anymen sends a
harsh and timely message with shots of the arrest of U.S. citizen Freddie
Gray that bookend the video. Gray’s treatment while being arrested and in
custody of the police led to his coma and subsequent death, yet just last
week another officer was acquitted of any charges in the case.

American Anymen also sticks it to the privileged and ingrained culture of
the art world as well. As Sullivan puts it, “American Anymen is trying to
destroy the idea that you have to be a professional to make art and give all
people access to representing culture through art.” He goes on to explain,
“Art and culture shape the way we view things and if the ruling class
requires you to spend 60 thousand a year on a liberal/art education, and
this education is required for you to produce art, then the ruling class have
a lock on how we view things though art.”

American Anymen will be supporting the upcoming release of Start My
Center with a show on July 16 th at (Le) Poisson Rouge in NYC, alongside
performances from The Veldt and A Deer A Horse.