Amanda X is about to start their first West Coast tour in support of their debut LP Amnesia, so with that in mind they’ve debuted the video for “Guatemala”, which was filmed over the course of their last tour. Watch it below. Their LP was Recorded by Jeff Zeigler (A Sunny Day In Glasgow, The War On Drugs, Kurt Vile) at Uniform Recording in Philadelphia, the record is out now courtesy of the venerable Siltbreeze imprint.

Born out of the Kensington neighborhood of North Philadelphia, where you can’t throw a rock without hitting a great band, Amanda X is the three-piece antidote to bumming on grey days and the Sundaynight blues. The Philadelphian women-Cat Park on guitar, Tiff Yoon on drums, and Kat Bean on bass-make music to remind you that colorful riffs and lilting oo’s are meant to complement post-punk shredding and astute songwriting.

Amanda X self-released their bedroom-cozy EP, Ruin the Moment, in 2012, taking the sunny-serious vibes with them to venues all over Philadelphia, as well as on a number of tours up and down the East Coast and Canada. Their penchant for playful stage banter, garagey guitar earworms, and dual harmonies that hit just as hard live, made them a a perfect opener for the likes of Parquet Courts, Marnie Stern, Dum Dum Girls, FIDLAR, and more.

After catching wind of their dedicated show schedule and powerful new songs, Philadelphia’s own Siltbreeze picked up their first album. The release of the upcoming debut sees the trio taking a new approach in their songwriting-stronger, faster, harder-hitting, but not without the lovely melodies and honey-tinged singalongs they’ve built their sound on. Amanda X’s lyrics are about everything from travel to friendships to fear, and they succeed in their revealing, spot-on honesty. 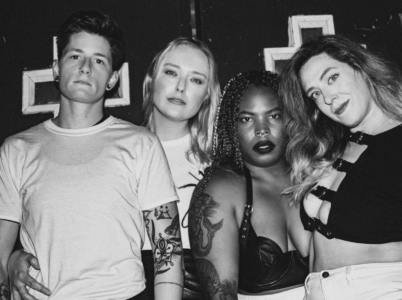