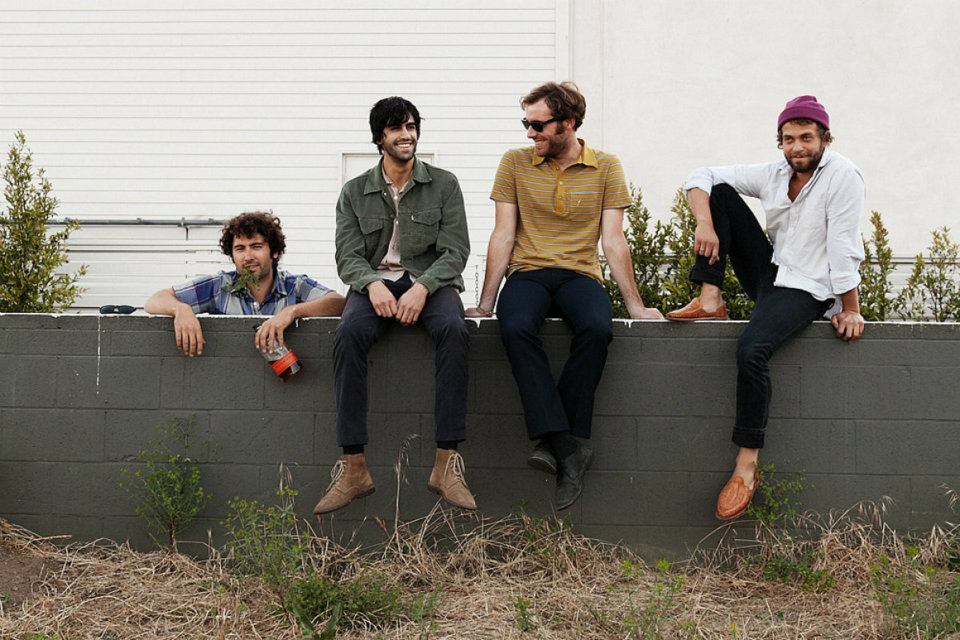 Northern Transmissions talked to Pedrum from The Allah-Las.  We caught up with him after a night out on the town, which included a waitress who poured quite a few shots of homemade schnapps.

NT: Tell me about the band’s fondness for the lo-fi sound, you guys used microphones from 1953 throughout the recording of your album.

PS: We are real big on the lo-fi sound. We had worked with different producers in the past, but could never really find the right fit. Finally we worked with Nick Waterhouse, he is the one that picked the mics, and was really able to capture the sound we like. He has so much knowledge about older recording techniques. We were really stoked about the end result. The microphones were really cool as well. Another great thing I almost forgot to mention, was that the mixing board was from Muscle Shoals Sound Studio. I think Wild Horses was recorded on it.

NT: How about the whole Garage Rock Revival, why has it gotten so popular over the past few years? Sirius even has a channel dedicated to it.

PS: There’s so many Garage Rock Bands these days, but everyone seems to be doing it a bit differently. It’s really interesting, some bands are doing the 60s style thing, while others are leaning more to the 70s punk sound. The genre will probably be around for a long time. People get really nostalgic for the past,  also they get really tired of newer music, so they tend to look for older stuff. Most of it came from time when bands didn’t have loads of technology as well, so maybe that appeals to traditional rock n roll fans.

NT: Your new self titled album “Allah-Las” has been described as ‘Psychedelic’ by some people. Do you think that label has been over used a bit? I tend to think that you might be a bit more influenced by Mick Jagger or The Byrds.

PS: Ya totally, I think that the term ‘Psychedelic’ has been really thrown around quite a bit. It definitely seems to be tied in with Garage Rock by many people, like their synaminous or something. When I think of Psychedelic, I think of an altered state. That’s where the term originated, I mean with The 13th Floor Elevators, it was about that influence and drawing on it to make music. Maybe people like to listen to our music when they’re stoned, that’s how they came up with that tag for our music. So I probably wouldn’t call us Psychedelic, just rock n roll.

NT: It was kind of fitting that you guys all met at the legendary Amoeba Music. You must have compiled quite the music collection between you guys?

PS: Me, Matt, and Spencer all met at Amoeba Music. I wish that I could afford to buy as much music as I did back then. We really had a great discount while working there. You can say my record shopping has waned a bit of late, unfortunately.

NT: Did you hear about that guy in England who was buried in a casket melted down from his vinyl collection? He was so worried it would go to waste after he died.

PS: No, that’s a great story. Totally badass. I heard about a company in the States that will mix your ashes in with your favourite songs, then press them into vinyl for family members, that’s pretty cool.

NT: Do you think the end is near for CD technology?

PS: Vinyl has made an enormous comeback in the last ten years. But I still think way more people are into cds, especially casual music listeners. That’s a pretty huge market. Not to sound cruel, but I think the average person probably doesn’t care about the sound quality, they just want to hear music. The format is really handy and easy to move around, I suppose that’s one of the few advantages of that technology.

NT: Five albums have been an inspiration to the band

PS: The Misunderstood – Before The Dream Faded

The Rolling Stones – Between The Buttons

The Pretty Things – Get The Picture

Gene Clark – No Other