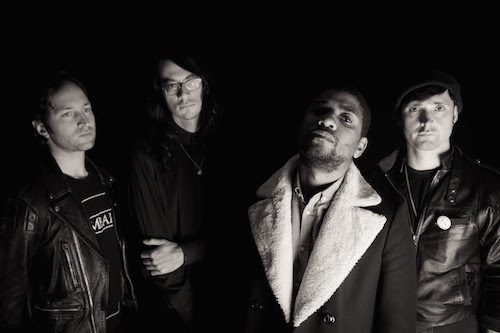 London-and-New York-via-Atlanta trio Algiers have announced a run of East Coast tour dates that will be accompanied by screenings of the sixth installment of Brendan Canty (Fugazi) and Christoph Green’s Burn To Shine film series. After being delayed for nearly a decade, Burn To Shine 6: Atlanta will premiere on April 9th at The EARL in Atlanta, with performances by Algiers and Moon Diagrams (Moses Archuleta of Deerhunter).

The filmmakers and Algiers will then take the screenings up the East Coast (full list of tour dates below, includes Coachella and Panorama Festival), with the film available at burntoshineatlanta.com following the April 13th screening in NYC.

Producer Brendan Canty and Director Christoph Green filmed six editions of Burn To Shine with their roving crew of shooters and audio geeks between 2004 and 2007, which included the likes of Wilco, Sleater-Kinney, Shellac, The Shins, Eddie Vedder, Tortoise, Will Oldham, Ted Leo, and many more.

After being delayed for nearly a decade, this Atlanta installment, curated by Lee Tesche of Algiers, holds vitality like no other, showing a music scene and city in transition, where generations past collide with major bands on the rise, capturing artists at the height of their powers, a few local legends who have since disappeared, and others that have gone on to much wider success.

The self-titled debut LP (released in 2015 on Matador Records) by Algiers is haunted by promises of the past: the rapturous call and response of millenarian gospel, the bellowing urgency of 60s protest soul, the scene-searching intensity of DC hardcore and the smeared viscosity of post-punk and no wave. But rather than revel in a state of nostalgia, the band wields these burdened visions to charge headlong into the future.

Over the album’s eleven tracks, these three émigrés of the American Deep South lay waste to appropriators, oppressors, revivalists and the cultural shock troops of capitalism. Vocalist Franklin James Fisher’s every shriek and incantation will take you from the sweaty fervor of Dennis Edwards-era Temptations through the righteous rebellion of Nina Simone to the solitary midnight howls of PJ Harvey. Shards of Lee Tesche’s guitar, along with Ryan Mahan’s bass pulses and synthesizer slashes, pierce through the processional, transforming neo-modernist hymns with explosions of foreboding and dread that evoke the vanguard of pop experimentation from Suicide to Roland S. Howard.