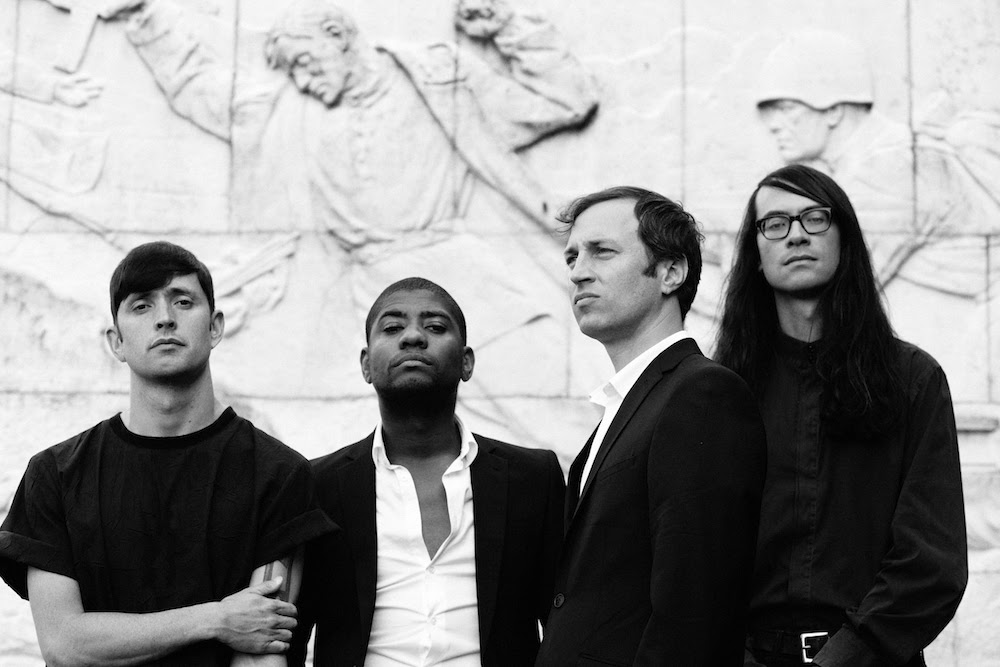 Matador Records has announced that it will release Algiers’ sophomore album, The Underside Of Power, on June 23rd. Produced by Adrian Utley (Portishead) and Ali Chant, mixed by Randall Dunn (Sunn O)))), with post-production by Ben Greenberg (Hubble, Uniform), touchpoints on this masterpiece include everything from Southern rap to British grime to horror movie soundtracks to late-70s English industrial to Northern Soul.

Now a four-piece, with the addition of Bloc Party’s Matt Tong on drums, the Atlanta-London-NYC outfit will bring their blistering live show to major East and West Coast markets this summer, following a stadium tour with Depeche Mode in Europe. The full list of tour dates can be found below the Gary Suarez-penned bio.

We won’t be led to slaughter.
This is self-genocide.
It’s the hand of the people that’s getting tenser now,
And when we rise up… (Algiers)

This is the musical response that dark times demand, one that not only shakes its fist but deploys it. Locally-informed global citizens, Algiers refuse to sit idly by while most contemporary artists appear perfectly content to sit out the revolution. Not only do Algiers harbor a purposeful sense of obligation in what they do on their latest resistance record The Underside Of Power, but they recognize the roots and thorns of precedent in said resistance.

“This album was recorded in a political environment that collapses the late 70s economic crisis and the looming onslaught of arch-conservative neoliberalism, via Thatcher and Reagan, into the late 1930s, a world riven by fascist nationalism and white power fantasies in the US and abroad,” says bassist Ryan Mahan. Their shared experiences and collective understanding of this rising tide of sinister politics compels them to make music together, to combat the potentially crippling waves of frustration and despair to let out a soulful roar, a call-to-action set to an eclectic, positively electric beat.

The inclination to do otherwise is one worth fighting. Take Algiers frontman Franklin James Fisher, for example. Writing incendiary and even beauteous lyrics from inside a Manhattan nightclub’s coat check room, enduring the same damn songs thumping away nightly in the next room for the pleasures of a predominantly white audience, he tends to see the bigger picture as well as its pointillistic details.

“This nightclub is every nightclub in the world, basically. Whatever is being played there, whatever is happening there is happening everywhere else in the world,” he says. “It’s as if the entire history of music is boiled down to these fifteen artists–and I use the term loosely,” he says with an exasperated, dismissive sneer. With the world burning outside, a generation’s obliviously privileged dances to a carbon copied soundtrack.

It speaks volumes that a black man in America with an expensive Master’s degree–and all its overwhelming personal debt–finds himself picking up shifts at such a place that literally manifests the culture industry’s exploitation and commodification of black experience. An aptly unjust fate, Fisher is confined to an enclosed space while others move their feet freely mere steps away from him. “You have to find ways of getting through it without completely losing your mind. Luckily I’m able to escape inside my own head.”

Fortunately, the multiracial quartet Algiers provides more than mere distraction, but rather a revelatory creative release and wholesale rejection of the globally normative corporate playlist culture. Poke at the seasoned members’ bruised flesh, and out come wafting touchpoints as disparate and intriguing as Big Black, Wendy Carlos, John Carpenter, Cybotron, The Four Tops, Portishead, Public Image Limited, Steve Reich, and Nina Simone, to name but a few. Deep echoes of Black Lives Matter and its 20th century forbears gather, surge, and subside in their often soulful work, a form of principled, acute dissent more interested in learning from the past than in evoking nostalgia.

And while many artists seem uninterested or even afraid to fully engage with these potent topics in song, Algiers has zero qualms about taking a direct approach. “We’re fortunate enough now where we’re able to openly talk about racist, violent police and murderous state structures,” says Mahan. “When we were growing up in the South, these critiques of class and race oppression were largely and sometimes violently suppressed. It’s why we take inspiration from the Panthers or the Chicano movement, to name two.”

Adding to this Casbah rocking mix of ideas is the relatively recent inclusion of drummer Matt Tong, formerly of Bloc Party. Joining the group for the touring cycle following their prior album, he’d spent time gelling with the original trio as a core component of their simply ferocious live sets to understand and help shape the dynamic. For a band that seems to revel and thrive in flux, Tong’s substantial role in the making of The Underside Of Power worked out well.

Beyond the technical necessities living their respective lives both in and outside of music, Algiers’ continued deviation from a more traditional band approach created a more versatile sound, one that better incorporates a collective and respective panoply of influences and styles.

Some of this is informed by their choice of collaborators in this process, a crew that includes Adrian Utley [Portishead], Ben Greenberg [Uniform, The Men], Randall Dunn [Sunn 0)))], among others. If-You-Like list that would consume a series of afternoons.

The band doesn’t concern themselves with that risk. “No matter what your messaging is, you can’t control what people will or won’t take away from it,” says Mahan. “The only thing you can do is put stuff of substance out there.”