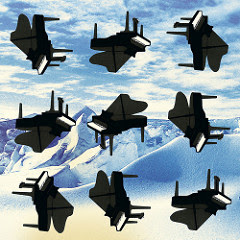 Hot Chip front man Alexis Taylor has released the video for “I’m Ready,” the first single from his upcoming album, Piano. Directed by Simon Owens, the video for “I’m Ready” perfectly reflects the gentle intimacy of the song and the album. Taylor said of the video concept, “Simon and I spent a long time discussing a U2 video that YouTube wouldn’t allow me to view, but in the end we chose to film in one take a performance of the song by an elder version of myself, at Burgh House where I will be playing a solo piano show on June 15th.” Owens added, “Working with Alexis was like working with Vantablack, I couldn’t see or talk to him. Alexis would only communicate through a guy called Gianni on the Darkweb. This whole process I really enjoyed. Thanks to Rick Baker who pulled out all the stops with the prosthetics. Shouts must also go to Ann Hartigan, Abi, Dom, Jon, Matt, Julian, Jack, Duncan Buxton and Daniel de Vue.”

Piano pares everything back to just piano and voice for an intimate record of new songs, reinterpretations of his own writing, and a selection of favorites both well known and unheard before by other artists. Recorded at Hackney Road Studios by Shuta Shinoda, Piano invites the listener to be privy to a very private recital, with Alexis’ vocal and piano captured live and up-close.

As well as Hot Chip’s six studio albums the band has released a wealth of material scattered across EPs, stand-alone singles, compilation exclusives, remixes, and covers. Thus far, Alexis has released two LPs and an EP under his own name, as well as three further albums of material performed with the semi-improvisational About Group. Additionally, Alexis has crafted side projects such as Booji Boy High and collaborated with Wiley, Peter Gabriel, Will Oldham, Fimber Bravo, Bernard Sumner, Robert Wyatt, Justus Köhncke, Green Gartside, The Memory Band, James Yorkston and David Byrne among many others.

Alexis Taylor’s Piano LP is due for release on June 10, 2016 via Moshi Moshi and features cover artwork by Oliver Payne.