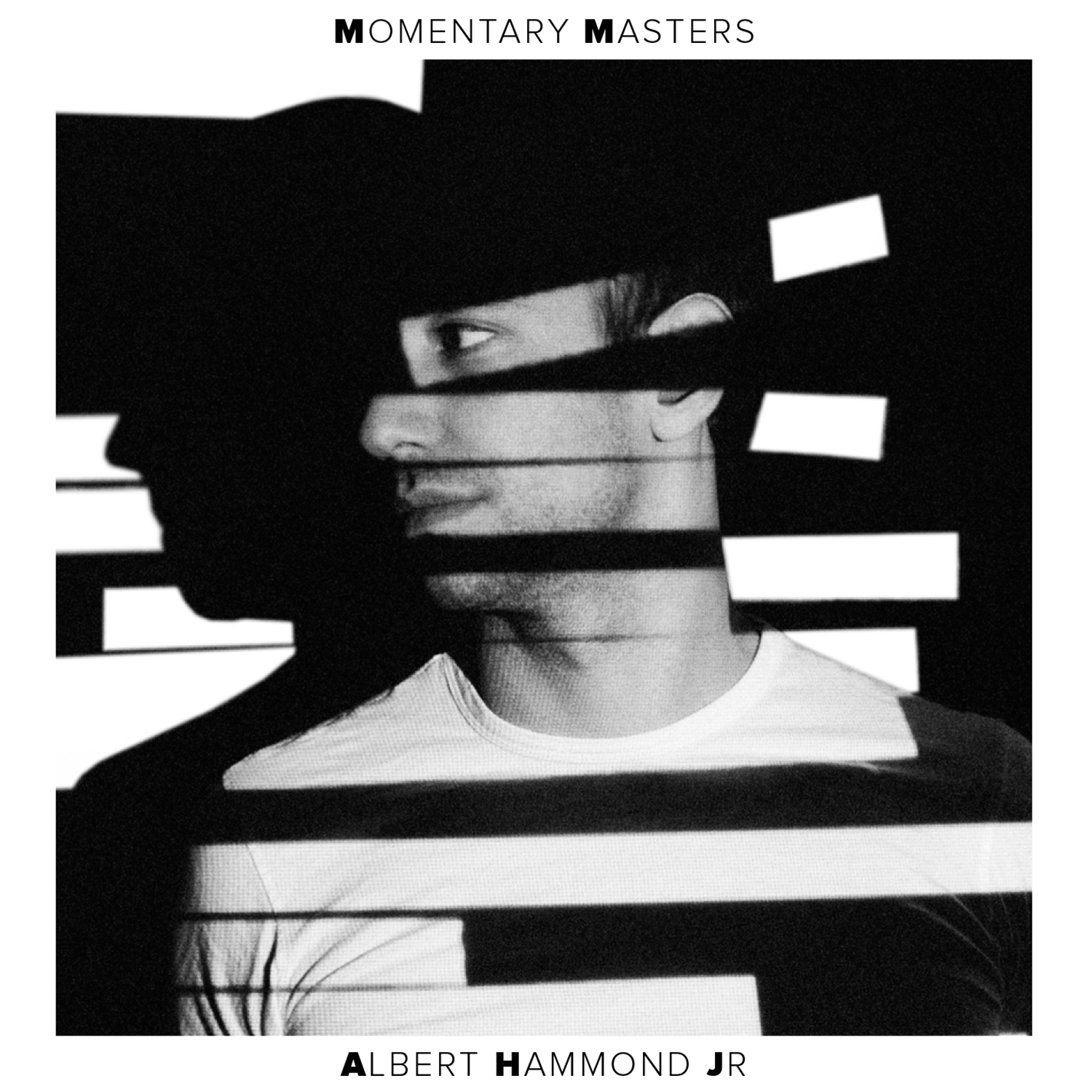 Los Angeles-born Albert Hammond Jr., guitarist for The Strokes and son of singer-songwriter Albert Hammond, is on the verge of releasing his 3rd solo album. Entitled Momentary Masters, the disc comes out on July 31st on Vagrant Records, just over 7 years after his previous album, ¿Cómo Te Llama?, bowed. Albert experienced several life changes during this time period, the abbreviated backstory being that he detoxed from drugs, reunited with the other members of The Strokes to create two more albums, released his own AHJ EP in 2013, got married, and moved from NYC to upstate New York.

Momentary Masters comes at a more settled time in Albert’s life and it was made through a collaborative process between him, frequent cohort, Grammy-winning producer, and friend Gus Osberg, and Albert’s live backing band which consists of guitarist Mikey Hart of Bleachers, guitarist Hammarsing Kharhmar of Mon Khmer, bassist Jordan Brooks, and drummer Jeremy Gustin.

Albert plucked the album title’s phrase from a bleak, but insightful passage in astronomer Carl Sagan’s book Pale Blue Dot: A Vision of the Human Future in Space. The takeaway theme from Carl Sagan’s words is that we humans are fighting and destroying each other and our environment to become self-important “momentary masters” of this unique “pale blue dot” we live in, when we should be valuing and preserving our home. Albert turned his attention to the idea of fleeting triumph – the elation and then the letdown, from one ephemeral moment to the next – that exists in our emotional DNA and how creativity is sparked by the transience of our feelings and is the reward for being fully engaged with life and what it has to offer. Heavy and heady stuff for a moderate indie-rock album!

Except that these concepts don’t totally translate into the tunes that make up Momentary Masters… What Albert highlights on the album is the reflection and acceptance of his past life and his moving on to a new life, which is encapsulated by his bedroom demo cover of Bob Dylan’s “Don’t Think Twice”. While the lyrics are Bob Dylan’s and are about a failed relationship, it can be taken as Albert’s past life where he “…just kinda wasted my precious time.” But now he’s changed into a freewheeling man who takes life as it comes, the highs and the lows, and “Where I’m bound / I can’t tell.” Albert is at his most interesting vocally on this song where, beset by a quiver in his throat, he delivers Bob Dylan’s words in a lower, more expressive tone.

Elsewhere on the album, Albert’s vocals aren’t exactly his strong suit as he dresses up his not-particularly-distinctive, straightforward timbre with an exclamatory delivery and/or processed effects. Many of the tracks off Momentary Masters also become sonically interchangeable over the disc’s listening time, with the last four songs implementing a similarly cantering pace and the too-familiar set-up of guitars, bass line, and drumkit (Although it must be said that the last minute of “Razor’s Edge” whirls with an exhilarating flurry of guitars and drums.). To top it off, on several numbers the guitar lines aren’t that melodic or refined in sound, displaying a discordant harshness that isn’t appealing to the ears.

There are, however, a few standouts like sparkling album-starter and lead single “Born Slippy” (No, sorry, it’s has nothing in common with Underworld’s same-named tune.) with its upbeat demeanor and changeable rhythmic pace. The verses are choppy, with brief start-stop cycles of bass, a brightly picked guitar note refrain, and kinetic drumstick tick. Albert reminisces about the years gone by, questioning in an earnest tone on the smoother flow of the chorus “Is the moment gone? / The party we begun…”.

A lively rhythmic groove runs through “Power Hungry” due to the supple bass line maneuvering, lightly tinkering guitar chime notes, and drumkit simmer. Albert takes on a lighter vocal register, sighing “I thought I belonged to something.” amid the funky vibe and added spoken word slink. The swell of pulled synth strings late in the track adds some poignancy to the proceedings. Crunchier noise-rock emerges on the energetic “Caught By My Shadow” which sounds like a cross between The Strokes and Interpol, at least sonically. A pummeling drum beat is stoked by low-end, agitated guitars and bass line while Albert sing-talks in an urgent tone, asking ominously “Who are you? / What could I make you do?”

On the lyrics and vocals-focused “Coming to Getcha”, a heartfelt Albert muses on a short-lived friendship that ended when his friend, named Sara, passed away. The album is dedicated to her. The drum beat proceeds at a slow pace, while a reverb guitar line and jittery cymbal tap fill the void. Second single “Losing Touch” radiates a The Strokes-like appeal with the looser feel of the dynamic drum beat, thrummed bass line, buzzing guitar line, and Albert’s lighter tone on the verses and louder proclamations on the chorus sections. It also contains lyrics that pertain to the album’s title and inspiration behind it as Albert matter-of-factly declares “You can’t control the ocean / You can’t control the tides / Maybe, maybe, maybe / put your ego aside.”