7 months ago
Words by Hayden Godfrey 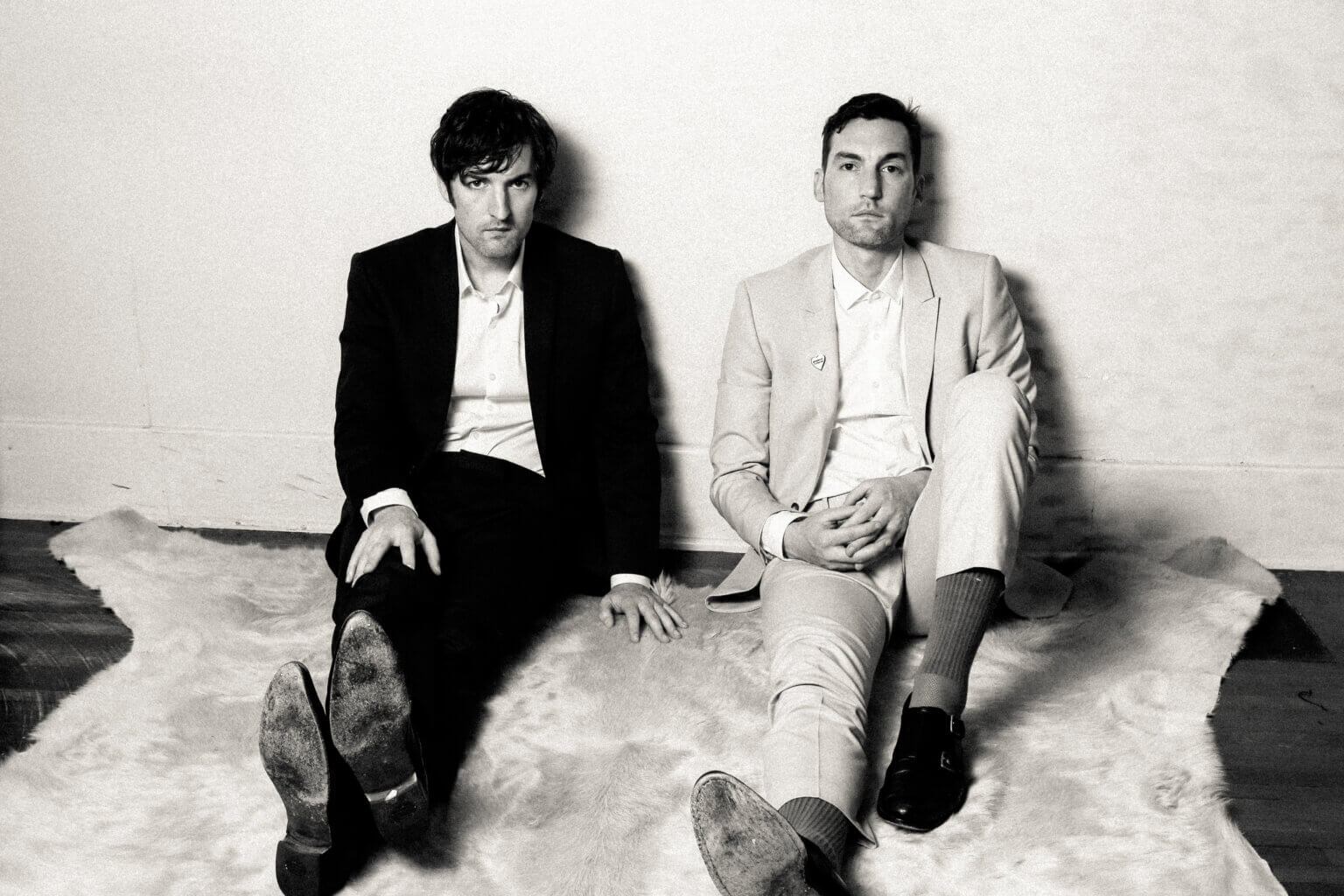 The music of Airpark is normally quite bombastic and energetic. Sonically, it’s just as expansive as the ambitious and lofty name would suggest. Composed of brothers Ben Ford and Michael Ford Jr., the duo was born and raised just outside of New Orleans, La. and has been recording as Airpark in Nashville, Tenn. since 2017, growing their brand of light, dreamy pop on the road and at home.

By the band’s own admission, Nashville has a broad but tightly knit music scene.Though traditionally a southern hub of country music, the last decade has seen a steady stream of Americana and blues outfits populate its lively streets. As Michael, the younger Ford brother, said casually, “if you’re there long enough, you’re going to meet just about everybody in town.”

By that logic, it’s rather surprising that the band isn’t more well-known.

On their quasi-self-titled EP Songs of Airpark, the Ford brothers dive into large, open landscapes and appeal to simple and relatable emotions. It’s a style and prose that’s very easy to understand and, more importantly, to enjoy.

Their upcoming release, however, the appropriately titled Quiet Type: An Intimate Collection of New & Old, is different. Set for release on Feb. 26 via Eugenia Hall Records, it has the duo explore more subtle and gentle arrangements influenced by the likes of Bill Fox and Harry Nilsson. On “Little Hollywood,” for instance, the two build up a delightfully pastoral mix with sparkling guitars, an atmosphere that continues delicately through “Quiet Type”. It’s part folk, part pop, and part singer-songwriter, all corners of the musical spectrum that the band has previously explored, but never dove head-first into.

Like everyone else last year, we were exhausted and anxious from what was feeling like the end of the world. At some point in the midst of all that the concept for the EP pretty much revealed itself. We wanted to make something calming in a time of chaos and communal in a time of isolation (thus the featured performances). We had friends that we would usually be unable to work with due to differing touring schedules come in and contribute to songs – that was the silver lining of the whole thing. We realized the whole process would be good for our own mental states and maybe other folks feeling the same way would benefit from it too. That was the idea anyway. (And yes, we indeed took Covid precautions while tracking.)

Though it features a re-imagined version of “Devotion,” which appeared on the aforementioned Songs of Airpark, it nevertheless has its own distinct sound, something that was clearly intentional.

“We’ve always admired artists that evolve a lot and take chances stylistically,” Ben Ford said from the small village of Grayton Beach, Fla., where the duo spent their Christmas holiday. “This was a very natural evolution for us,” he added.

The brothers found themselves subconsciously listening to more mellow music during the tumultuous year that was 2020. In particular, they praised Damien Jurado’s Saint Bartlett and Raising Sand, a collaboration between Robert Plant and Alison Krauss that was produced by T Bone Burnett.

They also explored more classic pop structures this year with “D Y W,” their collaborative single with St. Lucia, which dropped on Nov. 20. In doing so, they sought to create a more concrete identity for themselves as recording artists. As a result, the arrangements on their forthcoming effort are presented in the ways in which they were written—that is to say acoustically and collaboratively.

When listening to the relatively short, five-song EP, it can almost feel like the band is sitting close, expressing themselves with immense intimacy. While well-produced, the arrangements themselves are cozy, comfortable, and very warm.

Though impressive in songwriting and arrangement, perhaps the record’s most clever choice was the inclusion of numerous collaborators who were brought in to assist in getting the heartfelt message across. Among them are Natalie Carol (Valley Queen), Erin Rae, Alicia Gail (a.k.a Nightingail), Spencer Cullum (Miranda Lambert, Steelism, John Paul White), and Byron House (Florida Georgia Line, Tommy Shaw), all of whom make substantial contributions to the band’s already solid sound.

“That was also a result of wanting to do something communal in a time of isolation,” Michal Ford Jr. told Northern Transmissions, looking over at his brother mid-sentence. “The atmosphere influenced the way that we were thinking and writing.”

In keeping with the collaborative nature of the record’s content, the duo also employed their friend, Nashville-based artist Hannah Peterson, to draw the cover art, which is a stunning collection of rough pencil sketches set to a canvas-like background.

The Fords posed for Peterson for hours at a time while she drew them over the course of a summer afternoon. Two weeks later, she came to them with a portfolio of over 30 drawings for them to choose from, all of which the band said were beautiful pieces of artwork. While they noted wanting something a little looser and rougher than their previous covers—Ben was quick to point out how all of their previous releases included photography on their covers—Peterson’s style was perfect for this release.

“Everything she did, we loved,” Ben remarked of Peterson’s artwork. “That’s all her, we just let her do her thing,” he added.

With a cover reminiscent of Revolver and luscious acoustic arrangements, Airpark has established a friendly, recluse personality that is as inviting as it is mysterious. Their songwriting is perpetually modest and exceedingly unassuming, but it carries with it a lot of character.

In a way, the music mirrors the outward appearances of the Ford brothers themselves; it’s pleasant and honest in an oddly intriguing way.

Going forward, the band told Northern Transmissions that a full-length debut album is certainly on the horizon. Though the ongoing COVID-19 pandemic has prevented them from hitting the road in support of Quiet Type, they’ve been writing “a ton” of new music and, should everything go as planned, a full-length record will be released sometime in the near future. “It’s hard to plan out farther than a month or two right now,” Ben remarked. “We’ll just have to take it as it comes,” his brother added softly. “We feel like it’s time for where the band’s at right now to go ahead and do that full-length album, which we’re really excited about.”

And so, though they remain perpetually mannered in their journey towards crafting a more concrete and expansive catalogue, Airpark has proven that, with this newest effort, they’re an adaptable band with much more to offer than what’s on the surface. Though Nashville remains a crowded and bustling town filled with aspiring artists, Airpark may just be able to separate themselves from the pack.

Regardless, the band, like many up-and-coming musicians, will need a strong full-length debut to grow their audience. Given the catchy and relatable nature of their forthcoming EP, it seems likely that their eventual full-length debut will be insightful and incredibly honest.

Ahead of the album’s release the duo have shared the album track “Bring It Back My Way” featuring Erin Rae.

Michael Ford Jr. on “Bring It Back My Way” feat: Erin Rae

‘Bring It Back My Way’ is a song about missing someone and how jarring it feels that after a relationship is over (oftentimes) there’s suddenly zero communication with this person you’ve spent so much time with. In terms of the recording process, the highlight was definitely Erin’s involvement. As soon as she started singing the first chorus we all quietly lost it in the control room – her voice and vocal arrangements were mesmerizing.