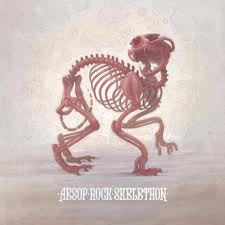 Rapper Aesop Rock, or Ian Matthias Bavitz as stated on his utility bills, is due to drop his sixth LP entitled Skelethon. The bare bone themed record takes the underground grit of hip hop and the raw energy of rock music to forge a sonic fuzz that isn’t quite Rage Against The Machine but thankfully can’t be lumped in with all the chart fodder rappers like Flo Rida and his ilk.

Rock’s aural soup comes from a diet of Run DMC and Public Enemy and mixed with visceral punk rock from the likes of Fugazi and The Dead Kennedys. As Skelethon begins to take shape you can certainly feel a rock influence creeping into the mix but not enough to detract from the fact this is definitely a rap album. What is refreshing about Skelethon, and indeed Aesop Rock in general, is that he doesn’t fall into the trap of regurgitating any kind of gangsta posturing in his vocal delivery or in his lyrical content. Skelethon doesn’t possess the bragging about bitches or bling you’d expect from modern day hip hop. However Aesop Rock has pulled in a high profile guest slot which does mean he has succumbed to a rap cliché in roping in a female vocalist but instead of someone like Rihanna the quirky tones of everyone’s favourite kooky character Kimya Dawson can be heard on ‘Crows 1’.

Even though Rock has bucked a trend in some respects to his craft, this doesn’t make for a complete listening experience. Each track almost sounds like a carbon copy of the last albeit with a slight tweak here and there. Lazer beams blast, fuzzy tones buzz and crackle, the drums boom and clatter but there isn’t enough variation to keep your attention across the album’s fifteen tracks. There are some highlights to mention, ‘Racing Stripes’ has a funny interlude with someone reeling off different kinds of haircuts, the reverse mullet should produce a chuckle. Another key moment is on ‘Ruby 81’ where background chatter is merged with fluttering synths that swell to manifest a cavalcade of noise that abruptly morphs into subtle chords.

Skelethon is an appropriate title as the frame work is solid but Rock could do with applying some muscle and flesh to bring his latest effort to life.