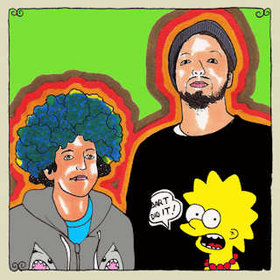 Share on TwitterShare on PinterestShare on PocketShare on RedditShare on FacebookShare on Email
After appearing on each other’s latest full-length records, revered rapper/producer Aesop Rock and celebrated folk songstress Kimya Dawson have officially joined forces as The Uncluded. Their album Hokey Fright will be released May 7th on Rhymesayers Entertainment.
When the pair collaborated on both Aesop’s Skelethon (Rhymesayers) and Kimya’s Thunder Thighs (Great Crap Factory), the two decided that they wanted to continue making music with each other as a group. The band name, which means to keep the things you don’t appreciate out of your life, is based on an excerpt from Michael Bernard Loggins’ book Imaginationally. This record helps to tell the story of two people who are finding therapy through making art together. Hokey Fright’s 16 tracks were written, performed and recorded entirely by Aesop and Kimya, except for a guest drum appearance by James McNew of Yo La Tengo on”Delicate Cycle”.  The album artwork was also done by illustrator/artist Travis Millard. While the record retains Aesop’s signature dense wordplay and Kimya’s soft spoken and innocent lyrics, the album has a dark feel, as the record was recorded in the wake of recent personal losses.