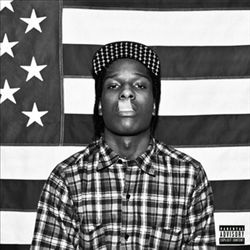 It’s one of the more obscure side notes of today’s musical landscape, that some of the best, style-defining albums are declared street- or mixtapes and never see a physical release. In 2011, this tendency reached its qualitative peak with seminal free-of-charge releases by The Weeknd, Frank Ocean, Kendrick Lamar, and, of course, ASAP Rocky, all of which pointed r&b and hip hop into directions everyone seemed to have been desperately waiting for. Despite sometimes questionable audio quality, the mixture of ASAP Rocky’s torn personality, ranging from über-flamboyant pretty boy tales to achingly detailed insights, with haunted, drug-fueled productions by the likes of Clams Casino or SpaceGhostPurrp, created an atmosphere rarely heard on any hip hop album before. Hot on the heels of LiveLoveA$AP, Rakim Mayers, who aptly got named after the God MC himself, embarked on an extensive tour with Drake and Kendrick Lamar, graced fanzines, lifestyle mags and late night shows worldwide, and collaborated with everyone from Lana Del Ray to 2 Chainz, and A-Trak to Hit Boy and Pharell. But Pretty Flacko kept his cool, even after signing an intimidatingly remunerated contract for his anticipated major debut Long.Live.A$AP. And while a large part of the scene seemed anxious to see him fall short off all self-imposed expectations, he hit them with Goldie. And Fuckin’ Problems. And 1Train. Basically every single sureshot he’s been wisely holding back for his first proper studio full-length. That pretty boy swag continues.