A Cautionary Tale: An Interview with Versing 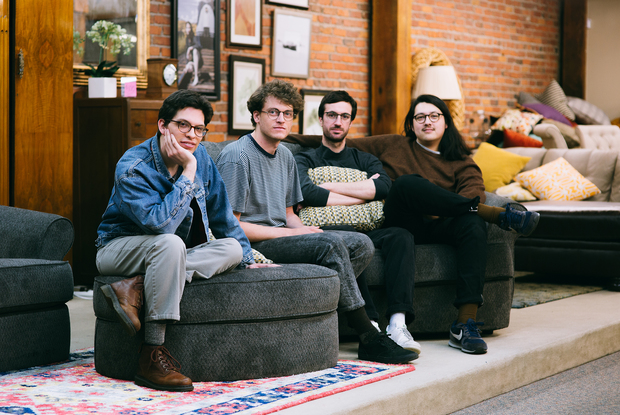 Filled to the brim with convulsive ideas and sounds, Seattle act Versing has proven prolific and expansive since their inception over the last three years. Continuously stretching their dissonant melodies and abstract themes, the quartet blurs the line between the personal and the political in their eagerly anticipated album for 10000 off Sub-Pop’s sister label, Hardly Art, on May 3rd. Guitarist, vocalist and songwriter Daniel Salas started working at his local college radio station as an alternative music director, hiring guitarist Graham Baker as his assistant and incorporating drummer Max Keyes and bassist Kirby Lochner. Eventually the members moved from Tacoma to Seattle with Baker routing in for practices before wrapping up his last year of college, the quartet consistently working on material that would lead to their first EP, Nude Descending.

Branching out from label to label with each release, including Seattle’s Help Yourself Records who connected them to Hardly Art, Salas pays immense thanks to their very first label that helped them out, Youth Riot Records out of Tacoma. Forming a bond with the label’s founder, Daniel Cohn, during Salas’ time at KUPS, Versing released their debut album at the turn of the year in 2016. Cohn’s steadfast diligence and meticulous attention to detail paved a path for Versing to get their footing through the door with Nude Descending, Salas enthusing that “[Cohn] and a couple other people handscreen printed the covers […] the fact that they did that was pretty important to us being able to get where we’re at now. Having that vinyl early on in our career was really helpful.”

After Salas directed their music video for “Call Me Out” off Nirvana, which utilized four iPhones and played with the viewer’s sense of perspective, they enlisted the help of Claire Buss, a filmmaker based out of Seattle who’s worked with the likes of Chastity Belt and Tacocat. Working at a YouTube channel and fully immersed in viral video culture, Buss constructed Versing’s video for “Renew” by incorporating a 360 degree video with two cameras simultaneously filming people’s actions occurring in a confined room. The project renders necessary multiple viewings, with its audience having the ability to physically maneuver the camera at various angles during the continuation of the song. Salas maintains that “[the video is] a really good continuation of the things we’ve explored in our previous videos but it’s a really different feeling, mood, and execution and I love that about it.”

Straying from very straight-forward and candid storytelling, Salas instead cedes almost all the control to his subconscious in terms of his lyrics, describing his writing process like “a puzzle where I don’t even know what the image is at the end, but sometimes it gradually creates a cohesive whole.” Abstract notions of thoughts and ideas are primarily how his ideas flow while he also loosely integrates his political stance as a socialist through the lens in which he writes, utilizing critiques of capitalism and classism in his songs. One of their latest singles off their forthcoming album, “Tethered”, depicts the inherent cohesiveness of humanity and how each of us is ultimately tied together, a cautionary tale to those that perceive our individuality as otherwise. “It’s political, but I like to make it not too on the nose”, as he often writes about archetypes and characters whose views he may not necessarily agree with, placing trust in his audience that they can take from his lyrics what they will.

While Seattle holds a steadfast sense of community in their music scene, often times with members branching off from one project to another, there are selectively fewer options for DIY bands to play in terms of venues. Like many burgeoning cities, warehouse and intimate shows eventually dissolve from the landscape of the city’s culture, yet there are still cornerstone spaces that local bands and touring acts can depend on and attendees can rely on for a memorable evening. “The best venue right now in Seattle is called Kome House. It’s a house venue and you watch the bands in a really big living room with a full stage in there and light rigs. Multiple cameras are set up that they will project onto the stage and the artists for visuals […] they go all out there, and that’s probably the best place to play in Seattle right now if you’re a DIY band,” Salas points out.

Eager and enthusiastic to hit the road for Versing’s summer tour and taking in the new sights as well as the comforts of familiar faces and places on the road, you can can catch the band in the following North American cities below: