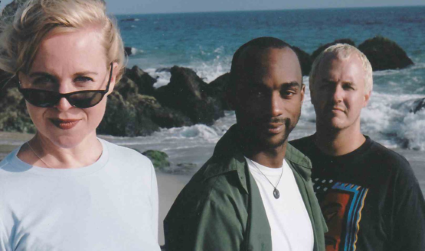 50FOOTWAVE has just released their ‘Bath White’ EP via HHBTM Records. This is their sixth mini-album since forming in 2004 and their first release since 2012’s ‘With Love From The Men’s Room’. The EP was produced by Los Angeles producer Mudrock, best known for his work with Godsmack. As Mudrock states, “These are the best musicians I’ve ever worked with, easily the most facile…they’re pros and they’re good people. 50FootWave is why I do what I do.”

Comprised of Kristin Hersh and Bernard Georges of Throwing Muses, and monster drummer Rob Ahlers, this LA-based power trio is known for pioneering the name-your-own-price movement, which began with their 2005 release “Free Music”. Named after the lowest note audible to human ears, 50FOOTWAVE was intended as an outlet for the noise/math rock pieces that didn’t fit the aesthetic of Throwing Muses or Kristin Hersh’s solo work.

50FOOTWAVE’s early releases are available for download free of charge here and licensed for sharing via Creative Commons. In this relation, Kristin co-founded the non-profit Coalition of Artists and Stake-Holders (CASH Music) in 2007. Over the past few years, CASH has not only completely funded Kristin’s own output, but has also powered dozens of other artist and label projects and has grown into a widely-recognized powerhouse of technical tools that enable commerce, communication and sustainability for artists.