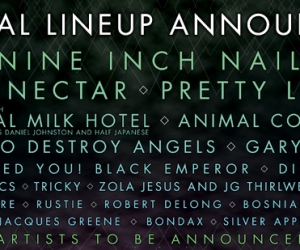 The initial line up for the 2013 Mountain Oasis Electronic Music Summit, slated for the weekend of October 25 – 27 in beautiful downtown Asheville, NC. Nine Inch Nails, Bassnectar, and Pretty Lights will headline the three-day weekend, which also will feature a performance by Neutral Milk Hotel, who have not played live since 1998. Additionally, Neutral Milk Hotel’s Jeff Mangum is curating the night of music surrounding the band’s performance, including special guests Daniel Johnston and Half Japanese.

Additional acts will be announced in the coming weeks, with some 50 – 60 artists slated to perform in October.

The Mountain Oasis Electronic Music Summit is a 3-day music festival staged in the heart of downtown Asheville, NC. The vision and programming philosophy behind Mountain Oasis celebrates the creative spirit of musical exploration, along with the innovative spark that fuels all of the arts. Woven around the twin threads of contemporary electronic music and the creative use of technology – old and new – the festival features world-class musical performances by many of the greatest artists in contemporary music, along with talks, seminars, and panels by artists and others; interactive experiences for audiences; art installations and exhibitions and more.

The events all take place indoors, within easy walking distance of one another, in the heart of downtown Asheville – in venues ranging from the ExploreAsheville.com Arena and the Thomas Wolfe Auditorium, both housed under one roof at the U.S. Cellular Center, to the world-renown music club, the Orange Peel; the beautiful performing arts space, the Diana Wortham Theatre; and in the intimate, high energyAsheville Music Hall. The mountain oasis that is Asheville provides extraordinary inspiration as a stunningly beautiful and unique setting for the festival. Both its rich cultural history and its current innovative vitality are inseparable from the Mountain Oasis experience.

How To Destroy Angels