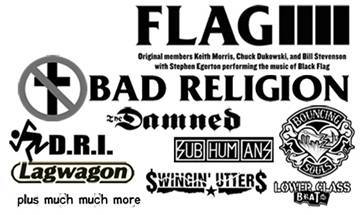 Punk Rock Bowling was started back in 1999 as a way to bring the independent music community together for an annual party. It has since grown into a 4 day festival in downtown Las Vegas that brings out fans and bands alike from all over the world. Now in it’s 15th year, more than 8,000 punk rock music lovers flock to Las Vegas to partake in the “biggest punk rock party of the year!”

3 days and 4 nights of outdoor festivals & late night club shows overtake the Downtown Fremont East District with over 70 bands performing throughout the weekend, many special guests, reunions and rare appearances. With 1,000 punk rock bowlers competing for over $15,000 in prize money during the day, over 1,000 downtown hotel rooms, pool parties, comedy shows and a poker tournament, this is a marathon party that never stops in the City Of Sin.

“Being fans of music ourselves, we like to take all the things we dislike about festivals and eliminate them from our event” says festival organizer Stern. “We want this to be a big party and we want everyone to have a great time. We offer good food with vegan and vegetarian options, and our drinks are probably half the price of most festivals. We also limit the capacity so it still sounds great and because our audience are such die hard fans of punk rock, we have little to no problems in the crowd. It’s like one big family enjoying a debauchery filled weekend in Las Vegas like any normal family! Ha!”

This year, we are very excited to announce our initial lineup for the 15th Annual Punk Rock Bowling and Music Festival which will feature one of the first full performances of none other than the godfathers of west coast punk rock themselves! Taking their cue from the black flag of anarchy, let us present FLAG. Long may they wave. Featuring original members Keith Morris (vocals), Chuck Dukowski (bass), Bill Stevenson (drums 1981-1985) along with SST labelmate and Descendents guitarist Stephen Egerton (guitar) performing the music of Black Flag.

We are also very honored to have, for their very first time at PRB, preeminent punk band BAD RELIGION, who will be releasing their new album True North this January 22nd on Epitaph Records. In a world still brimming with rampant anti intellectualism, inequality and oppression, the band’s signature brand of sonically charged humanist dissent seems as relevant as ever. A free download of the new song “Fuck Off” is available here. http://emailunlock.com/epitaph-records/bad-religion-f-you/