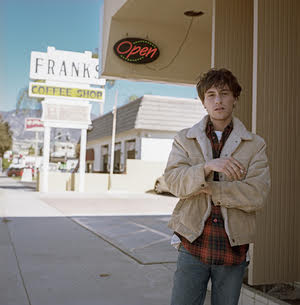 Max Jury’s official music video for lead single “Numb”. The track appears on his forthcoming self-titled debut album, which will be released June 3 via Marathon Artists. Watch the premiere below.

To celebrate the release, Jury will tour worldwide this spring with U.S. dates at Los Angeles’ Hotel Cafe. See below for full list of dates.

The new album follows Jury’s two 2014 EPs, Something In The Air and All I Want. Last year, Jury toured extensively both stateside and abroad, including supporting dates with Lana Del Rey and Rufus Wainwright.

Jury started recording the new album at Electric Lady Studios in New York City with Inflo (Alicia Keys and D’Angelo), however an unfortunate incident involving candle wax and Jimi Hendrix’s historic mixing desk led to Jury being ejected from the studio. He continued recording at a friend’s home studio in North Carolina. Jury wanted to maintain the gospel-soul bridge he was constructing to his own country roots and reached out to a director of music at a local church. “Jackson Russell turned up with his three cousins, and he became a huge part of the album,” explains July. “He works in the church, he lives in the sticks and he was the most amazing guitarist, one of the most effortless, genuine players I have ever heard. And his cousins sang like angels. Everything came right from the heart. It was a huge blessing.”

Jury has been playing music and singing since childhood. He was raised in a household of country, soul and classic rock but when he heard Neil Young in his early teens, something shifted in him. He began to delve deeper into the country music that was the soundtrack to life growing up in Iowa—finding his way through George Jones, Willie Nelson to Gram Parsons, The Byrds, The Flying Burrito Brothers and contemporary artists like Lucinda and Wilco. With his teenage friends, he embraced the alternative indie of Elliott Smith, Pavement and Sebadoh. And from his parent’s love of classic soul, he found a link to D’Angelo and even hip-hop artists like Drake and The Weeknd. Jury explains, “Soul music and country might seem like different genres, but strip the arrangements away, and you find the same kind of songs and situations, dealing with matters of the heart.”