Hinds’ album was initially postponed due to COVID-19, and the record is now released during a time when all conversations should be focused on the Black Lives Matter movement, dismantling systemic racism, and defunding the police. While the band could not push the release of the record again, they are committed to supporting BLM and are selling a special edition t-shirt, with all net proceeds going to the following four organizations: @BTFAcollective (Black Trans Femmes in the Arts, USA), @ACER (African Career, Education, and Resource, USA), @AMAC (Asociación de Mujeres Africanas en Canarias, ESP), and @SOSracismomadrid (ESP). More information HERE + resources on “Ways You Can Help” HERE.

Hinds have been one of the more exciting garage leaning indie rock bands of the last half decade. Hailing from Madrid, Spain and taking up residence in Brooklyn, NY, Hinds have crafted two pretty perfect, raw and scrappy rock n roll records and now with the release of their third album The Prettiest Curse, the band amp up their sound, expanding the canvas they were previously painting on and have made one of the more wonderful records to come out so far this year. Working with producer Jenn Decliveo (Demi Lovato, Ben Platt, Anne-Marie), The Prettiest Curse shows the band embracing Spanish for the first time on record, opening up their arrangements and embracing a fresher pop sound, all the while sounding completely like themselves.

The record stomps out of the gates with the wonderfully 80s tinged “Good Bad Times”. Singer/guitarist Carlotta Cosials perfect vocal melody sets a precedent for what is to come on the rest of the record. Synths bubble up and around the absolute spine tingling harmonies. “Just Like Kids (Miau)” doubles down on the poppier elements of the record. A deliciously bouncy piano infects the track with a head boppingly perfect hook. The song directly tackles the issues that come with being a female musician, touring around the world in a successful act and still getting mansplained to about their craft. “Can I tell you something about you and your band / ‘Cause I’m sure you’d love to listen to my advice / You’re always out of tune / And there’s no place there for you,” Cosials sings, echoing a lot of the sentiments that Hinds have heard out on the road. Sentiments that clearly have no leg to stand on as Hinds not only effectively skewer these personalities, not only lyrically on the track but also through their clear excellence in songwriting and performance. Album standout, on an album that has many standouts. “Boy” is the record’s perfect centrepiece. You can’t count the amount of vocal and melodic hooks that are absolutely littered throughout the song. Hinds strikes a perfect balance between the musical tension and sunshine-y nature of the lyrics. The pre chorus amps everything up to 10 with the band singing in Spanish but when they hit that chorus with it’s daydreamy melody and an outstandingly charming gang vocal, the whole proceedings shoots up to 11. When you think you have the whole thing all figured out, Hinds bring out “Come Back And Love Me” which brings things back down a bit with a sweetly acoustic guitar based lament. The songwriting on The Prettiest Curse is so very strong and one of the things it showcases is how deft the band is at using harmonies to their advantage. Every song features so many exciting and interesting vocal parts and Hinds carries it all off effortlessly.

Embracing a poppier sound at a stage in their career where it could’ve been a gamble turns out to be anything but for Hinds. The songs on The Prettiest Curse may be poppier than what fans of the band are used to but it doesn’t diminish from the raw power of the group. When the whole band screams with abandon on the track “Burn”, “Take My Heart Cause I Don’t Want It”, the only thing you’ll be thinking about is where all the goose bumps covering your body came from. 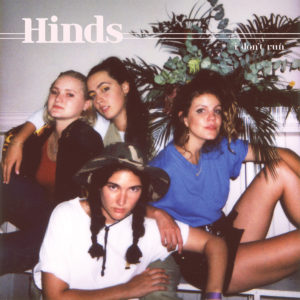