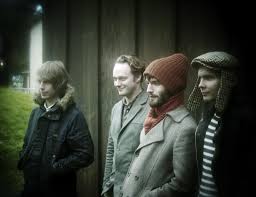 Throughout the entire course of today Sigur Rós will be unveiling a 24-hour ‘Slow TV’ event live on
Iceland’s National Television – and streaming live globally via YouTube – set to a constantly evolving
soundtrack based around elements of new song Óveður.Starting at tonight’s Summer Solstice and continuing throughout the longest day of the year, ‘Route One’ is a 1332km journey the whole way round Iceland’s coastal ring road, broadcasting the trip live in its entirety, via National Television channel RÚV 2.

“In a day and age of instant gratification and everything moving so fast, we wanted to do the exact
opposite,” says Sigur Ros’s Jonsi Birgisson. “Slow TV is counter-active to the world we live in, in that it happens in real time and real slow.”

Driving anti-clockwise round the island, the journey will pass by many of the country’s most notable landmarks, including Vatnajökull, Europe’s largest ice-sheet; the glacial lagoon, Jökulsárlón; as well as the East Fjords and the desolate black sands of Möðrudalur. The soundtrack to the journey is being created moment-by- moment via generative music software. The individual musical elements of unreleased song, and current Sigur Rós festival set opener, Óveður, are seeded through the evolving music app Bronze, to create a unique ephemeral sonic experience. Headphones, external speakers and full-screen viewing are recommended.