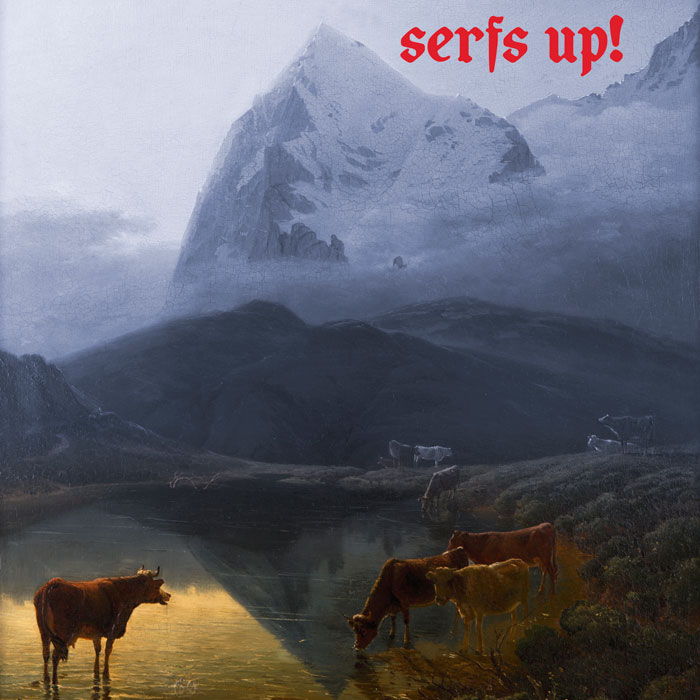 With a band dynamic as tumultuous as the negotiations around Brexit, it’s something of a modern marvel that Fat White Family have managed to release a third album. With a drug habit that makes “>The Libertines look like The Osmonds, the South London delinquents were beyond breaking point when it came to the end of touring sophomore album ‘Songs For Our Mothers’; all suffering from some kind of addiction and with Saul Adamczewkski booted out of the band due to his crippling heroin dependency, the outfit looked to have imploded. Leap forward to 2019 and with a relocation to Sheffield, Fat White Family have (kind of) reconciled to produce ‘Serfs Up!’; a huge sonic departure from their nihilistic post-punk-psychedelic melange of their earlier years, their third album’s sprawling mind-fuck of ever-morphing styles, taking in funky-psyche rock, garbled electronica, sophisticated string arrangements, tatty glam-rock and all that’s in-between, is simply baffling.

So, you’re probably wondering what the (kind of) reference relates to? Throughout the making of ‘Serfs Up!’ band members repeatedly went on strike, notably bass player Nathan Saoudi objected to Adamczewkski re- joining Fat White Family, so downed tools, Adamczewkski followed suit and refused to work also. Throw in a hefty amount of narcotic dabbling, it’s still a wonder this album has seen the light of day. Saying that, if it wasn’t for pharmaceutical enhancement, the band might have created an entirely different record. Frontman and brother to Nathan, Lias, when speaking to Q Magazine gave some insight into the album’s (ahem!) inspiration “we were listening to Yeezus by Kanye West and just boshing loads of ketamine”. Just to add to the drug cocktail, when the sessions came to an end, they realised they were a few tracks short so “we all mircodosed some acid and managed to write a couple of songs.” The outcome from tripping their nuts off comes in the form of the stripped back, fidgeting ‘I Believe in Something Better’, a mesh of weird clicks and bleeps smooshed together with the odd ethereal hum and nuanced sci-fi noises. With all the extra-circular shenanigans surrounding the album, it meant that a lot of it was bolted together on the fly, which quantifies ‘Serfs Up!’s loose, free-form vibes, along with Lias’ stream of conscious-rambled lyrics; Strangely, it all works!

The grubbiness of their earlier work appears as cameos on ‘Serfs Up!’; ‘Feet’s trippy, languid funk boasts a motorik beat and Lias’ smutty ruminations of exploring things carnal “I could not believe it/could not believe my eyes/the thing I saw down there/down between your thighs.” ‘Fringe Runner’ mixes fluid arrangements with ridged beats, making it one of the album’s filthier sounding tracks. A shadiness is transmitted via the 8-bit bleeps and twangy surf-guitar on ‘When I Leave’, where the band’s vocalist drawls “forget about your womanhood” with a predatory purr. The LP’s closer ‘Bobby’s Boyfriend’ gently wafts and buzzes as we find out “Bobby’s boyfriend is a prostitute”. ‘Vagina Dentata’ is the trojan horse of the LP; sonically it’s an almost free- form jazz wobble through hazy motifs and abstract pockets of saxophone clouds. However, if you were to Google ‘Vagina Dentata’, this term “describes a folk tale in which a woman’s vagina is to contain teeth, with the associated implication that sexual intercourse might result in injury, emasculation or castration for the man involved” …GULP!

Elsewhere on ‘Serf’s Up’, Fat White Family plunge into a world that they’ve never frequented before, one of sophistication. ‘Rock Fishes’ is a wash of quivering strings and a light dub bounce, ‘Oh Sebastian’s orchestral flourishes touch on a sentimental feeling as Lias whispers “Oh Sebastian won’t you cry for me.” The revolving door of instrumentation on ‘Kim’s Sunset’ is wonderfully unpredictable; slick guitar lines overlap with piercing synths, as they share airtime with plinky-plonky rhythms and hushed, velvety vocals. It all makes for a dreamy concoction that buoys the celestial wordplay of lyrics like “faces lit up with immortal smiles.” ‘Tastes Good With Money’, which contains a spoken word ramble by Baxter Dury is where the record embraces a penchant for Glam Rock but where the glitter is smeared and patchy.

These narcotic ne’er-do-wells have forged a near genre-less sonic odyssey; if they’re still around for album four, through more tales of infighting, hallucinations and horse tranquilizers no doubt, who knows what they’ll sound like next.