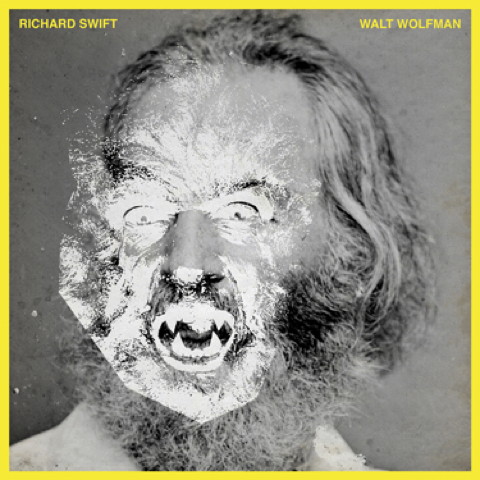 Artist: Richard Swift
Album: Walt Wolfman
Label: Secretly Canadian
Rating: 6
Rating (just for the title): 10
Richard Swift has released a diverse set of eclectic music the past few years that include a soulful EP in Ground Trouble Jaw, but also an ambient electronic project under the name Instruments of Science and Technology. With this latest offering Swift wades into some Zappa-esque garage pop that seems to have a fresh sense of humour to whole affair. I mean the album’s called Walt Wolfman, and the cover features a photoshopped Lon Chaney as the Wolfman over a portrait of the author of “Walden”. Brilliant.

Swift it seems is using Walden as a bit of inspiration to just do whatever he wants with some songs that sound a hell of a lot of fun to play live. The problem is it’s all kind of dull to listen to. The album starts out with a little ode to Whitman with Swift using his patented falsetto voice to sing: “Whit-man”. Maybe it’s just me, but maybe it would have been funnier if he just kept going with his own joke and called him Wolfman. That’s what the album is called anyway, so why not? When the album gets to “Zombie Boogie”, you get a sense that the album is drawing from MC5 and Stooges influences, all with a
sort of “Monster Mash” kind of vibe. It’s all in good fun, but with that fuzzed out sound I guess it’s supposed to lend it some credibility. Don’t get me wrong it’s a good sound, but the songs just aren’t strong enough to hook you into a groove. Swift was able to stretch out his vocals with the some of his previous efforts, but here they’re kind of hiding behind the electronic processing, so there’s nothing really to drive the songs.

The best song on the album comes at track 6: “Drakula (Hey Man)”. The nonsensical lyrics really work on a track that would have fit well on any Troggs album. After that, well, it’s about it on a quick 7 track album. While sounding quite competent, Walt Wolfman kind of lacks, how should I say, bite. Unless you’re a devout fan of Swift’s work you’ll probably find more entertaining garage pop records elsewhere, but perhaps like “Monster Mash”, “Drakula (Hey Man)” can be the Halloween novelty song this year.