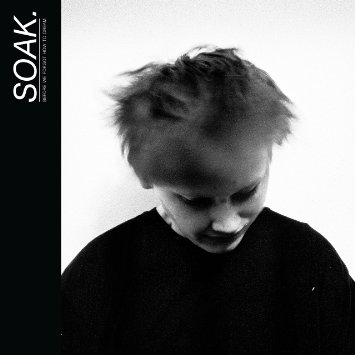 Before We Forgot How To Dream

Singer-songwriter Bridie Monds-Watson (AKA SOAK, a merging of the words ‘soul’ and ‘folk’) has been on the U.K.’s musical radar for the past few years, garnering a slew of critical accolades including The Guardian’s One To Watch in 2013 and, more recently, being named a breakout artist by such illustrious institutions as NPR, The New York Times, and iTunes. Bridie’s debut album, Before We Forgot How To Dream, which she produced with Villagers’ guitarist Tommy McLaughlin, comes out on Rough Trade on June 2nd and it’s a culmination and expression of her childhood and adolescence spent in her hometown of Derry in Northern Ireland.

Bridie began to play guitar and write songs and dubbed herself SOAK in her early teens. Instead of chronicling her life’s journey in a personal journal, she chose to convey her astute observations and poignant sentiments through song lyrics. She built up quite a following playing at local open-mic nights and soon attracted the attention of various record labels. She finally settled with Rough Trade, and with 3 lauded EPs and numerous gigs and music fests like Other Voices and SXSW under her belt, SOAK is poised to become a household name.

Bridie’s vivid, bittersweet vignettes and insightful outlooks on life shine brightly on her lyrically deep and absorbing, vocally involving, and emotionally rich debut. A wistful, curling lilt infuses Bridie’s vocals as she sings “Come on… be just like me / Come on… be a nobody.” on the ethereal chorus of “B a Nobody”. Despite her burgeoning fame, there’s no irony to be found here; just Bridie’s vocal airiness touched with a shade of melancholy and an intro of gently strummed guitar with her fingers glancing audibly over the strings. The song develops instrumentally over its course, quickening its pace by bringing in a subdued drum beat, bell tone and piano notes, and occasional added guitar line flourishes and backing vocals. It ends, however, in stripped down mode, with just Bridie’s delicate coos and her guitar at the mic. Like the rest of the songs on the album, “B a Nobody” is sincere, heartfelt, and quietly captivating.

A stronger, but measured drum beat features on the brief slice-of-life, family ties-driven “Blud”, along with faster strummed guitars and Bridie’s drawn out and sometimes wavering vocals as she sing-talks about an argument that she’d rather not have overheard. The lyrics “You’re in my blood / I’m in your blood.” may not be that complex, but their intent and Bridie’s bruised vocal tone hit home. Bittersweetly pulled violin, lightly dropped piano notes, guitar strum, and Bridie’s reflective and expressive vocals fill out the ruminative “Wait”. Her wounded, rueful vocal pangs remain, but uplift is provided by wordless vocal accompaniment near the end of the song.

The crash of waves on shore opens the perceptive, lyrics-centric, symphonic-pop of “Sea Creatures”. A laid-back beat, guitar reverb, and swaying strings radiate a mellow vibe as Bridie opens up even more on this track, revealing her aching heart, imploring vulnerably to a friend that “I don’t get this town / Neither do you / We should run away / just me and you”. A slow-building menace and darkly glistening guitar lines spotlight Bridie’s plaintive intonation on the lyrically fractured storyteller “24 Windowed House”. Some of Bridie’s words are obscured, an occasional occurrence on some of her other songs too, but key lines like the grim “I’ll bring her heaven / even if I’m stuck in hell.” can be made out.

Mellifluous, contemplative guitar motifs and dreamy vocal harmonies on “Shuvels” compliment Birdie’s low-key mood as she articulates with an acuity beyond her numerical age that “Time has proved that we’ve outgrown our old selves.” The upbeat, pop-oriented “Reckless Behavior” sonically captures a youthful spirit, but Bridie’s lyrics belie this supposed ‘truth’ (of acting carefree, thoughtless, and/or nihilistic) as she frankly declares “I won’t waste my youth.” Clearly she’s been living by those words and has achieved this goal with her accomplished and affecting debut album.