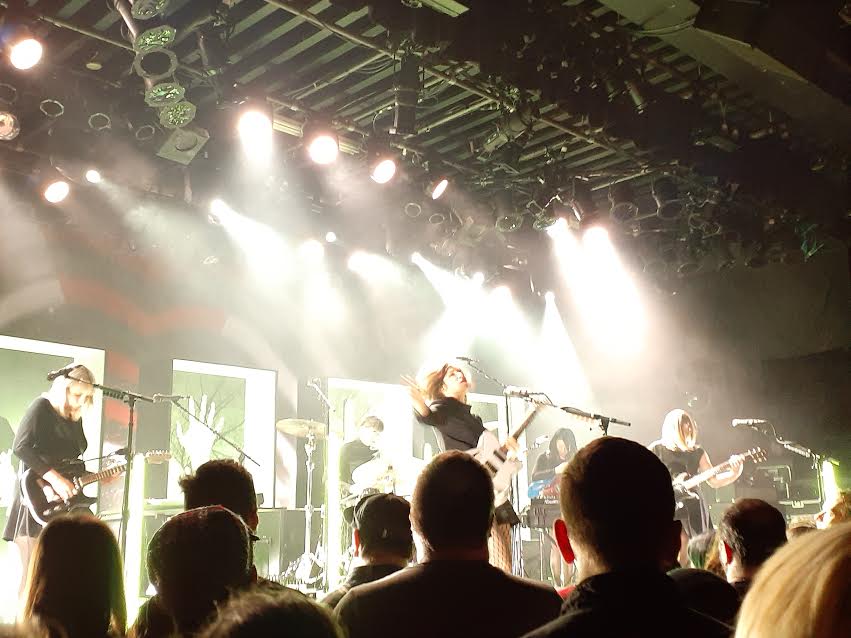 Sleater-Kinney 'Live in Vancouver, BC' November 21st, photo by Leslie Chu
Share on TwitterShare on PinterestShare on PocketShare on RedditShare on FacebookShare on Email

Like acknowledging the elephant in the room right away, Sleater-Kinney kicked off their explosive set at the Commodore Ballroom last night with the title-track. “I need a quick injection to get you out of my way,” they sang. Considering Janet told Rolling Stone this week she left because her creative role was diminished to that of a session musician in the face of Carrie Brownstein and Corin Tucker’s staunch, unified vision, this line rang with all new relevance.

As did the line, “Maybe I’m not sure I wanna go on,” from “Can I Go On.” But the remaining members, along with new touring drummer Angie Boylan (Aye Nako, Freezing Cold) and two synth players, continued undaunted, so sure in Corin and Carrie’s course.

With help from St. Vincent, who produced The Center Won’t Hold, Sleater-Kinney explored sleek, rock-based pop and a “modern,” abstract visual aesthetic, largely mirroring her own work. Complementing their polished sonic and visual makeover, Sleater-Kinney took the stage in pure black outfits, all of them in turtle necks, except Corin. Background panels framed images of reaching hands.

The tension from “Center Won’t Hold” and “Can I Go On” quickly died, though. Carrie looked particularly unphased, free, even, as she smiled through the slicing, barbed “Price Tag” and jumpy rocker “All Hands on the Bad One.”

Despite Sleater-Kinney’s glamorous makeover, most of their set was thunderous and furious. “Dig Me Out,” Ironclad,” “Entertain,” and “Hurry on Home” were rumbling, tumbling, destructive brain-scrapers. Bluesy rock-stomper “What’s Mine Is Yours” featured a smoky solo by Carrie; the band put an exclamation mark on it with a cathartic, abrupt ending. They whipped up a frenzy with their latest single, last month’s “Animal,” which they recorded while Janet was still in the band. The doom procession and contorted, squealing razor riff of “RUINS” fell as heavy as a gnarled, ancient tree trunk.

Sleater-Kinney softened the blows with the on-the-run sprint of “LOVE.” They brooded with “The Future Is Here”; its snappy electronic drum pad and synth programmed to resemble an organ cast a magic, haunted spell.

Some of Sleater-Kinney’s tenderest moments proved to be their best, including the road-weathered “Restless,” Corin’s centre stage performance of the piano-backed “Broken,” and the world-weary “Modern Girl.”

“And if the world is ending right now, let’s dance the bad dance. We’ve been rehearsing our whole lives,” Sleater-Kinney sang on the poppy yet urgent “Bad Dance.” Anyone of any age could have enjoyed Sleater-Kinney’s bold and rejuvenated performance at the Commodore Ballroom, but for those who waited 25 years, the show was wish fulfillment of a true lifetime rehearsal.