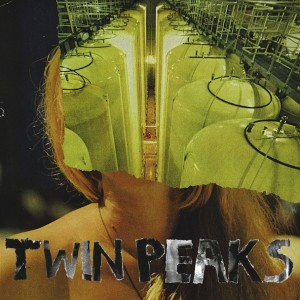 Twin Peaks is arguably the greatest major network show ever. Of course the show only lasted a short two seasons, and for a portion of the second it almost completely derailed. So the “greatness” of the show that’s still admired today over 20 years later can be traced back to individual moments, feelings, a large part of that due to the incredibly haunting soundtrack by Angelo Badalamenti. So it would take a certain brashness for say a band to name themselves after the show, not Dale Cooper, or the Black Lodge, but the actual name of the show itself. It’s that brashness though that makes young Twin Peaks, a young garage pop band from Chicago, new album breakthrough with moments of brightness.

You wouldn’t believe that these kids aren’t allowed to drink in the bars that they perhaps play in the States judging by their debut album Sunken. There is a classic old time garage pop feeling to this record that feels unnatural coming from boys that were only born in the 1990’s. When you hear the guitar hook of the opener “Baby Blue”, you aren’t thinking about the irony of the self-reference, but you’re thrown back to the 1960’s to a place where guys wore leather jackets and crooned into microphones in a smoky juke joint. On “Natural Villian” you hear that their fuzzy garage sound may actually be inspired by Twin Peaks after all, not by Bandalamenti’s sounds, but perhaps as a more realistic sound of a band playing in the Roadhouse. “Fast Eddie” and “Out of Commission” are typical quick and dirty rockers that may not be the most original, but there’s a fresh energy that you can’t help but like. “Stand in the Sand” begins with a Ozzy Osbourne type laugh that might even be sampled from “Crazy Train”, but then again Twin Peaks have shown to this point that naivety in rock and roll is almost a must, because there’s such a danger in over-thinking something and having it come out a pretentious mess. “Irene” is a dreamy number that actually builds nicely and even sounds like a song that stupid James Hurley would sing, which in a weird way makes it angrily endearing. “Boomers” starts to stretch the boundaries of the garage pop sound because a song which borrows so much from the 50’s begs for a cleaner sound, but when it does pay off with a faster climax you forgive the tininess. “Ocean Blue” is another fuzzy crooner, and ends the album on a note that feels like it just scratches the surface of the potential for Twin Peaks.

The problem with a band like Twin Peaks, that may be married to the nostalgic feel of their sound, is that not only will there be not that much room to grow, but they’ll inevitably need to grow because they’re physically so young. Will a band like this stick around for multiple albums? Or will they just fade away continually trying to chase what I presume is the time of their lives right now? Their “oblivious-who-cares” attitude is a perfect compliment to the actual songwriting talent these guys have, and even though the album doesn’t have a lot of depth to it, it’s enough to take notice and enjoy. I may have preferred though if they had named themselves “The Bookhouse Boys”.