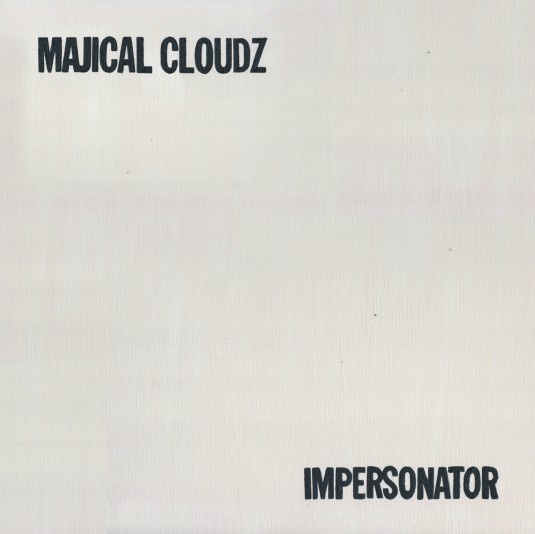 There are two lyrical snippets that typify the aesthetic and the listening experience of Impersonator, the sophomore record by Majical Cloudz. The title track which opens the LP contains vocalist Devon Welsh announcing “this song is proof that I’m trying” with a rich, textured voice like a smoldering cup of coffee. While on ‘Bugs Don’t Buzz’ Welsh muses reflectively “It pays to be on the edge of existence/just riding the surface”. The latter is indicative of the elusive, minimal arrangements that populate the pair’s latest release. The former is a simpler notion, in that Welsh and electronic whizz Matthew Otto set out to forge a record of stillness, something that was almost non-existent musically but solid in vocal the department. Never mind trying, this is exactly what the twosome have produced.

Impersonator is a record of subtle touches; they are almost so slight their mere presence is dream-like. Take the looped, vocal sample of the aforementioned title track, the simple repetition of hums and “dum-dum-dums” make for a musical tapestry like muslin cloth. ‘Illusion’ is like one long surge of ethereal synth with the occasional glockenspiel stab. “This is the place where things disappear” Welsh professes, ironically Impersonator is a record where nothing feels tangible, the sheer stillness of the Canadians second record is enchantingly ambiguous. Not to discredit Otto’s sparse electronics but the whole album pivots on Welsh’s faultless baritone making for a wonderful juxtaposition to the atmospheric whirs on the periphery.

There is the slight danger Welsh and Otto’s new slice of celestial synth work could start to merge into one long buzz of mysterious noise but midway through Impersonator, right on cue the skittering swirl of ‘Mister’ drops to add a welcome change of pace. The tracks use of varied beats and percussion wouldn’t sound out of place on Radiohead’s most recent LP ‘The King of Limbs’. The nocturnal hums are still there but the subtle staccato bounce provides an unexpected euphoric rush. In a similar mould, the off beat minimal clatter of ‘Turns Turns Turns’ slows the pace down again but blends the pair’s use of sampled vocal ticks with the infrequent boom of processed beats.

With vapour like tendencies it’s hard to think who Welsh and Otto are mimicking with Impersonator because the album has a ‘less is more’ charm and character all of its own.

“Impersonator” By Majical Cloudz comes out May 21st On Matador Records.