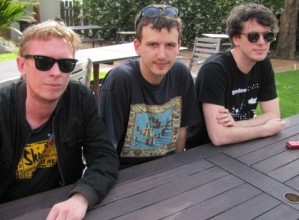 Northern Transmissions chatted with Joel Flyger from ‘Popstrangers’ about their upcoming album ‘Antipodes’, being nominated for the ‘New Zealand Critics Choice Award, and being able to quit their various dreaded daytime jobs. Their new album comes out February 26 on Carpark Records in North America.

NT: I usually don’t start off with a video question, I was really curious about “Heaven” who came up with the concept?

JF: Luke McPake came up with the concept, we had worked with him before on another video of ours and we also hang out with him quite a lot so we trusted him to come up with something. He was into the Heaven’s gate cult stuff at the time so wanted to include some similar themes in the video.

NT: You guys had previously released music on  ‘Flying Nun’, will you continue to work with them?

JF: In 2012 we released a single with Flying Nun. It was great at the time to be involved with the label and be apart of their 30-year anniversary tours. We are now signed to Carpark Records in the US and Spunk Records in Australia and in NZ, so for the time being we won’t be working with Flying Nun.

NT: It must have been a great experience working with a label with such a rich history.

JF: It was good to play shows with bands that were part of the original Flying Nun roster. We are fans of quite a few of the bands on Flying Nun, so yes it was good to be involved with this.

NT: Your new album ‘Antipodes’ was recorded in a 1930 dancehall, what was the vibe like?

JF: Recording the album was a lot of fun. The studio seemed to be perfect for us to kind of hideaway and play music and drink and smoke no matter what time of day or night it was. Its at the bottom of a long set of stairs and the whole bottom floor of the studio has no windows, so it was a productive place to be in for long hours at a time. We work pretty fast when recording as we track most of it live, so that seemed to make the vibe more relaxed and enjoyable instead of slaving away on the same part of a song over and over.

I spent some nights going back into the studio working with our friend and engineer of the album, Thomas Healey, and it was always something I looked forward instead of a chore, and I think part of that was because of the studio being a relaxed place to go too and hideaway in the dark.

NT: For those who haven’t heard the record, how big of a departure is it from your previous work?

JF: The tones in the new album are a lot richer and I would say on the whole a lot easier to listen too. It still sounds like an album made by the same band, but the album has a good range of songs on it as apposed to one idea or sound that we stuck with on our earlier recordings.

NT: You guys had bonded a few years over a history of “sharing bad day jobs”, have you been able to quit the day jobs? Can you share with us what they were?

JF: We just worked in different hospitality jobs over the last few years apart from Adam who worked in video post-production. Its just that same thing where you have to earn enough money somehow to buy guitar strings and pay for rehearsal spaces which are really expensive in New Zealand, But you also want to be able to quit at any time or take time off to go away and play.

We have quit those jobs now and at the moment are just doing odd jobs here and there to stay afloat before we head back overseas in March.

NT: You guys were nominated for a ‘Critic’s Choice Award’ in New Zealand, how big was that for you?

JF: The Critic’s Choice Award in New Zealand was good to be included in as it put us in front of new audiences and made it aware to us that we were starting to be recognized by more people than those just in the local music scene alone. Good things came from it and it made us more eligible for government funding to record and make music videos.

JF: My essential albums change all the time but I have liked these for ages:

Cleaners from Venus – In the Golden Autumn.