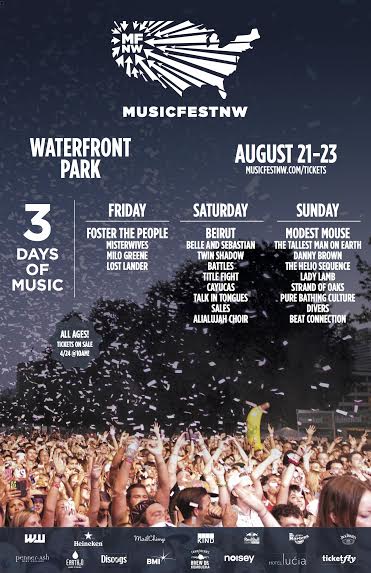 The annual summer music festival is in its 15th year, showcasing
national and regional music in one of the most compelling cities in the country.The lineup features live performances from Foster The People, Modest Mouse, Beirut, Belle and Sebastian, Danny Brown, Twin Shadow, Battles and many more.

MusicfestNW runs in conjunction with TechfestNW, a gathering of leading
thinkers passionate about technology, design, entrepreneurship and innovation.
Now in its fourth year TechfestNW showcases Portland as a digital and cultural
hub. This summer TechfestNW moves to Revolution Hall on August 20 –
August 21 (1300 SE Stark St, Portland, OR 97214). The speaker lineup will be
revealed in the next few months.