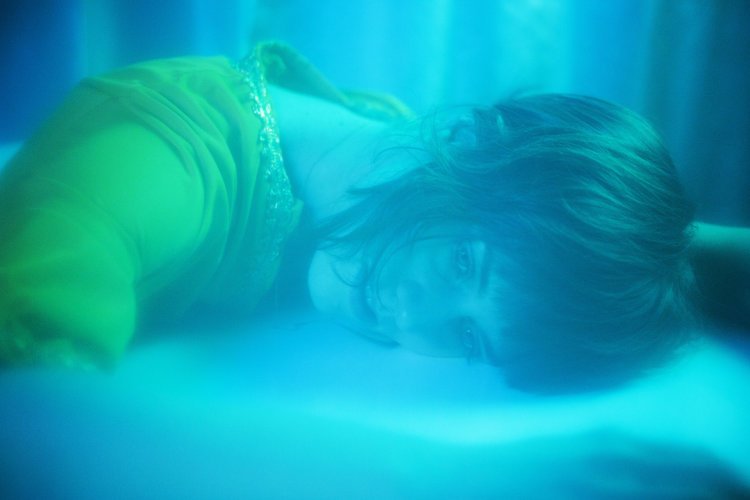 After going from intern to full-blown musician, Katie Von Schleicher has continusouly blown listeners away. After her powerhouse records like Bleaksploitation and Shitty Hits, she’s coming back with a new 7″. Isolating herself in Maryland to record Party Dawn, Schleicher has found even more intimacy from home recordings. We caught up with Schleicher ahead of her upcoming tour to talk about making the release, and how Paul McCartney and Jeff Buckley inspired her recording process.

Northern Transmissions: What inspired you to go back to Maryland to record these new singles you’re putting out, and did the city inspire you at all?

Katie Von Schleicher: Going back to Maryland is a cost-effective way to be alone. I had toured most of the fall and wanted to get out of the city (and my head) for a few days. They were initially something I considered putting on my next record, but I decided to move ahead with them rather quickly and do a 7”. I don’t think the city inspired me particularly. Touring had me interested in doing something new.

NT: I understand there was also a lonely and isolated feeling where you recorded these songs?

KVS: It’s an empty house, but also the one I grew up in. That’s a funny feeling, coming from a big family. It’s also very quiet, especially in the dead of winter.

NT: How did this compare to the studio and bedroom recordings that led to Shitty Hits?

KVS: I did these mostly alone this time. I have better gear now, I’m working on my engineering and guitar playing skills, it’s a natural progression I think for the time being.

NT: What caused you to shelve Shitty Hits twice before putting it out and was there something you learned from this experience going forward?

KVS: Yes, I was messing around with cassette recording a lot and Ben offered to put one out for me, so that’s how Bleak was born. I knew with Shitty Hits that I’d like to up the ante and try a different method, but since Bleak was my first attempt at recording myself (and was quite lo-fi) I felt like all possibilities ought to be considered. I thought about working with a producer, and I thought about working with a familiar engineer, and after both I just felt like I needed to try and make a jump in fidelity on my own, for many reasons. The biggest one is that it’s liberating to rise to the occasion yourself, faking it till you make it is one classic method of becoming an engineer.

NT: You also have this wonderful knack to inject humour into your music, even when the subject matter is dark, does this come from a comedic background or is it more of a coping mechanism?

KVS: Thanks. I don’t have a background in comedy, if that’s the question, but I gravitate toward it. I would probably benefit from an improv class. But I don’t think those two things are mutually exclusive. Everything’s a coping mechanism! Life is absurd… right?

NT: How do you feel like working at Ba Da Bing has influenced your perspective as a creator or even how far you’re willing to go?

KVS: I felt a lot of pressure to do a good job considering it was my only opportunity to release something on a label, with Bleak. It’s impossible to convey what that meant to me. But I also felt like I should do exactly what I wanted to do and stop questioning myself. Ben is very supportive of artists doing wild shit. He also likes it when people have dissenting opinions. So we disagreed on plenty of things from when I was making Bleak (it wasn’t supposed to be an album, it was supposed to be a 50 cassette run where each cassette was a different set of solo performances to tape, I insisted on getting it mastered and he felt that wasn’t necessary, etc.), but I’ve grown a lot in my ability to say “no, this is what I feel like doing.” This influence is more about the experience of working at Ba Da Bing and in the music industry, coming into my own with that.

As a creator, it’s taught me that you should go as far as you imagine going, then just a tiny bit further. We get so many demos, and the vast majority are so genre-safe, so confined to a set of influences. Before working at the label I, too, was more careful. I think from the outside you imagine making something ‘comprehensible’ will play in your favor, and I’m sure for some labels that’s the case. But for us it’s always the idiosyncratic that catches our ear.

NT: How did inspiration from Paul McCartney and Jeff Buckley’s home-made records influence your own humble recording process?

KVS: I love how Paul McCartney went from the most expensive studio experiences and being  a part of cutting edge recording technology to doing stuff at home on a Studer 4-track. It’s important to feel like you’re not limited by money, experience, what-have-you. Jeff Buckley’s Sketches for my Sweetheart the Drunk came later on, too. That takes courage to deliver it to a label, especially one that’s expecting hits.

NT: What do the next few months look like for you and do you have anything else on the horizon outside of your 7″?

KVS: I’m touring in Europe right now, I’ll be back in New York briefly and doing a few shows there – a collaboration with Julie Byrne for the Hum Series, a Rooftop Films premiere, then some dates for Sam Evian’s album release – then I take off opening for Mitski around the country. Another band I’m in, Wilder Maker, has a release in July I’ll be touring on. Then I will be so happy to stop for a second and write, all August long. I’ll work on a new record in the fall.