Interview With Soren From ‘Indians’ 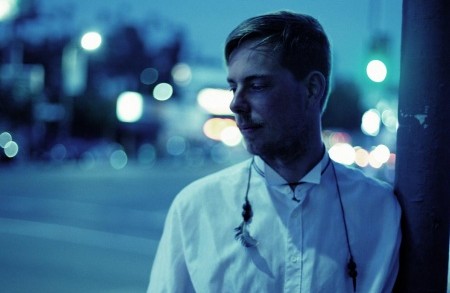 Northern Transmissions sits down with Soren Lokke from ‘Indians’ to discuss discarded guitars, and a bit of Scandinavian culture.

NT: You originally planned to release the songs what would be ‘Somewhere’ on the Internet only. How did you end up working with 4AD?

Sl: In the beginning I just wanted to put some songs that I had written on the Net, I didn’t have big plans for them. One day my Manager called me up and asked if I was sitting down. He told me 4AD was interested in putting out my songs. The whole thing really came as a big surprise to me. I was really quite shocked, I was dizzy for literally three days. The whole thing really started after my friend and Manager heard one of my songs. He encouraged me to write more, so it kind of all started from there.

NT The recording process was pretty low key, did you feel a bit of pressure going into the sessions?

SL: There was a bit of pressure, I was writing some songs at the same time. I really wanted to make it easy on myself, I didn’t want to buy any new musical equipment. I thought the album should be recorded in a real basic setting, working with equipment I was used to.

NT: You taught yourself to play guitar just prior to the recording ‘Somewhere’?

SL: I had never done a guitar song before. I actually found a guitar on the street, it was about to be thrown in the trash. I took it home and cleaned it up, bought new strings for it. Right away it felt good in my hands, the sound was really nice. I like it so much, I ended up using it on the Album I was really inspired by it. When I write a song I’m inspired by sounds. I don’t sit down and say, I’m going to write about this subject. I don’t even have a melody, it’s the sound of an instrument that gets a song started.

NT: Tell us about the song ‘Cakelakers’, what is the inspiration, and meaning behind the tittle?

SL: It doesn’t have any meaning. It was just a word that I made up. I was really stuck in the process of trying to think of a title. I really didn’t want to spend anymore time thinking of a name for the song, so ‘Cakelakers’ just poped into my head. The song, like other ones on ‘Somewhere’ is about hope and loss. You want to keep certain things close to you, and somethings you just can’t, which is pretty difficult.

NT: There’s quite a bit of sadness and melancholy in Scandinavian culture, where do you think this comes from?

SL: That’s a really good question. I think that compared to North America we are not that open minded. We also tend to keep to ourselves more. There are many dark and rainy days in Denmark, so you spend quite a bit of time indoors with quite time to think and reflect about things. It can be pretty isolating for many people.

NT: Where was the 4AD Session shot? It was quite a nice setting.

SL: We shot the thing in one day over thirteen hours. It was filmed on a privite Island in the south of England. There’s a whole bunch of summer houses there, there;s a studio there as well. We also recorded there, it was quite beautiful. It was a bit of a long day though, we filmed till two in the morning.

NT: In the past few years a number of other groups have made it outside of Denmark, including The Ravonettes, Iceage, and Efterklang. Why do you think is driving all this success?

SL: I think that things have changed quite a bit over the last ten years. People are able to communicate much faster. I mean ten years ago we had to wait for six months to get music that was released in Europe or North America. Today, if you want to explore new music, you get it instantly. I think that’s definitely one of the reasons. Also, technology has really made it easy to do the everyday stuff with our label, and get our music out there to people around the world.. The music scene in Denmark is really healthy, more and more bands are making it outside of the country. I feel really lucky to have the chance to play outside of the country, I’m also very lucky that I have good people that work with me.

NT: Has your music been well received at home so far?

SL: It has been going really well so far, one of the biggest music magazines in Denmark gave ‘Somewhere’ six stars, they called it a masterpiece. I was really proud of that. It’s really hard to judge your own music, or to put a value on it or a price tag on it. If a painter paints something, he really has no idea whether it’s worth, or if anyone will like it. So I guess it really does mean quite a bit when your music gets high praise, especially coming from someone in Denmark.