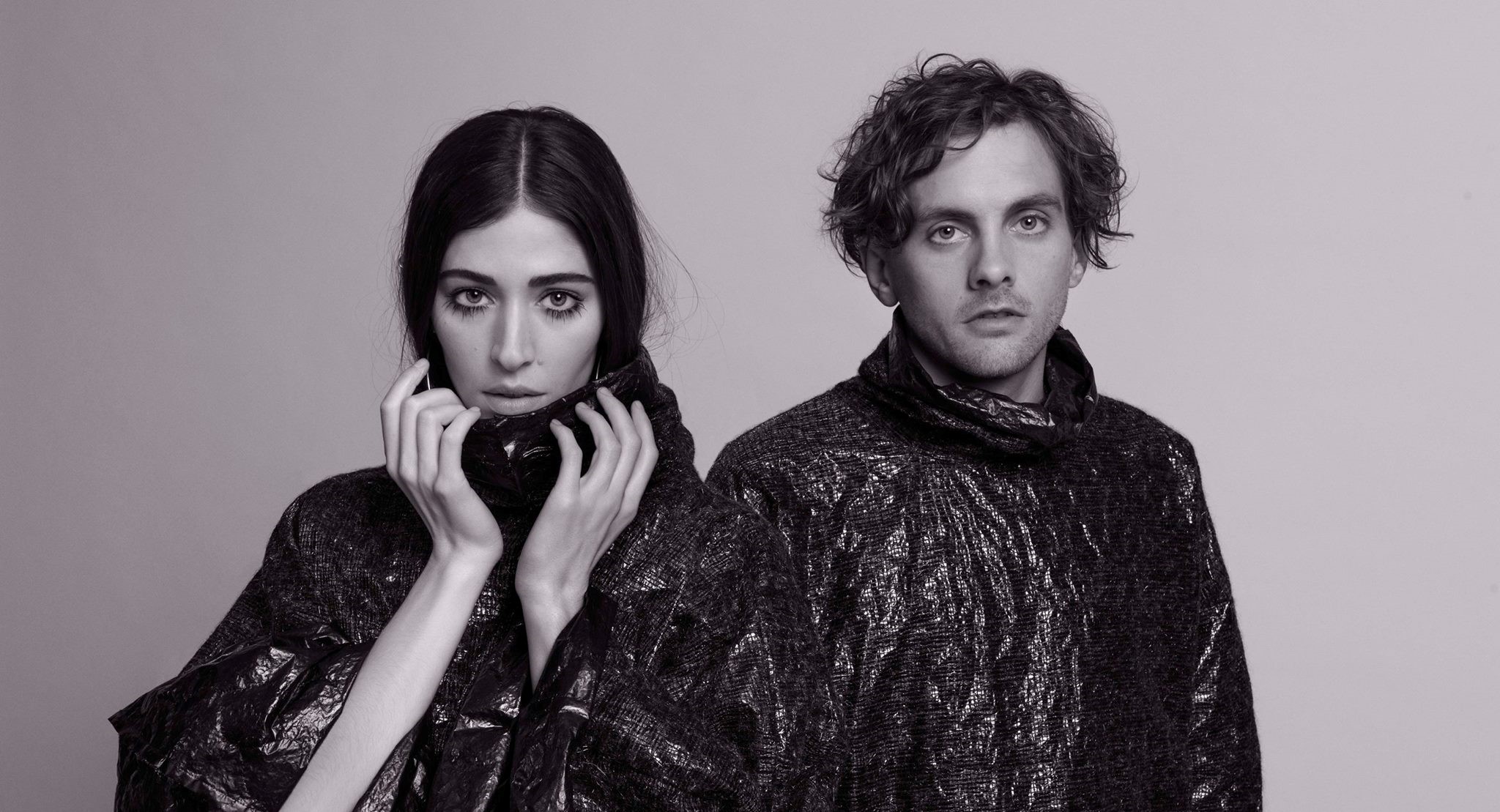 Critically acclaimed pop duo Chairlift – made up of writer/producers and multi-instrumentalists Caroline Polachek and Patrick Wimberly – are currently on tour promoting the release of their third full-length album, “Moth”. The record marks an evolution from 2012’s “Something”, with a sound that’s been embraced for its mix of New York City inspiration, bombastic hooks, and emotionally uninhibited pop music.

In addition to their work together under the band moniker, the two have also gained influence as a collaborative force, having worked with other notable artists, including Beyoncé. On their experience of having co-written and produced the single “No Angel”, off the singer’s seminal self-titled 2013 record, Polachek says: “I think for us, it was a big thing because I think this industry sort of had these ideas of there are rules and there are ways that people do things and that there’s a hierarchy; and then to work with an artist like that it sort of made us realize ‘wait a minute, everything’s open.’ Genres don’t exist.”

It’s the last part of that statement that many longtime fans of the duo may acknowledge as a great part of their embrace; that is, a band that continues to break the musical molds it creates with each preceding release.

With the two now in full-tour mode, Polachek and Wimberly discuss the path of having broken their mold once again with “Moth”, and how they overcame some shared fear of how to make it all work on stage.

Northern Transmissions: I read in a recent Guardian interview that you prefer being in the studio, versus performing live. Is that true?

Patrick Wimberly: I don’t think that it necessarily is. There was a part of me that was really afraid of going on tour for this record, but I think that fear has gone away now that we’re out here. We’re actually really enjoying ourselves now on the road.

One of the great things about our job is getting to do both. We spent a lot of time in the studio working on this record. At the same time, you get antsy and want to get out there.

Caroline Polachek: They’re so different. I honestly feel more creative when I’m in the studio, but then there’s something that’s just so emotional about playing for people, too.

I think on this tour, more than any other tour I’ve ever been on, I’ve been super sensitive to the energy of people in the room. It might be because the material that we’re performing is just more open and personal. But, that’s the sort of high that doesn’t exist in the studio.

NT: So an appreciation of both sides, then…

PW: Honestly, I’d been dreadfully afraid of coming out on the road on this record because I didn’t know how we were going to do it. But once we figured it out, it’s been nothing but pleasurable. I do feel like we’re connecting with fans more directly and obviously than we ever have before.

NT: How many shows did it take to get comfortable?

CP: I don’t know how many shows that was because there was a lot of work-shopping… like we’d go out and do a couple shows; come back, add some songs; re-work some; we changed the band; and went back out and did a couple more shows. We were sort of in a “lab” in December through February, and now it feels like we’ve got it.

NT: Has that changed your relationship with any of the songs on the album?

CP: Yes! There’s a song on the record called “Show U Off”, that was a nightmare in the studio. When we wrote the song, it felt like a solid piece of songwriting, but the production never quite worked. We completely stripped and built the production six times. What made the record was the sixth complete production that was built for the song. And, we were sure that it was going to be even more of a nightmare to play live after taking us that many tries to get it feeling right; but then it was the opposite! It’s so fun, and I hope to release a couple live versions over the course of this tour because it was such a huge surprise and relief as to how good it felt with so little in the arrangement. I think we were just overthinking things in the studio.

NT: Did that come from the reaction you were getting, performing live?

CP: It was actually just being in the room with the four musicians playing together. It was like, “you do this, you do this…” We all just did the bare minimum, and played it well. We gave it space.

PW: Caroline and I are both multi-instrumentalists; we play a lot of different things and try to figure out what we’re going to do in the show. Because in the studio, we just do everything. Caroline actually became quite the bongo player over the course of this record! (laughs)

NT: I know Caroline, you mentioned elsewhere that you played bongos on “Polymorphing”, and that that song was one of the most fun ones you’d recorded. Is that still the case, a few months on?

CP: Yeah, I’d say the number one most fun! It was all improvised. That song was literally about mania, but in a fun way. You don’t really know how to describe it. I guess that’s what music’s for, right?

NT: Did that song change a lot during those sessions?

CP: We’d just get them on “Polymorphing”! (laughs)

PW: We put them on “Polymorphing”. (laughs) So that song, is like a full horn section; [David Ginyard], who played bass on a couple songs; Caroline and I doing percussion all over it; 3 guitarists…

CP: It wasn’t like the spirit of the song changed. It just got fancier and classier. (laughs) The more people that got on it, it just got more “adult”, in a good way. In like the kind of adult we want to be, way! (laughs)

NT: Given that you two mostly write and record everything, did that song spark a thought of “hey, maybe we should get more people down”? Like, just for your own enjoyment?

CP: That was really part of the mission for this new record anyways, since it was our space. We weren’t paying for a producer’s time or a studio day rate, so we just had people in and out constantly.

PW: And, we weren’t sending the tracks anywhere. We’d just say “do you want to hear this thing we’re working on? Come over. It’ll probably be fun…” And, then if they were musicians, we’d probably end up recording them. (laughs)

CP: Even if they weren’t musicians! Like my friend Jury – who’s a dancer that I work with – we just had her opening and closing a synth filter as I played it on “No Such Thing as Illusion”. I just said, “here’s a knob. Turn it and see what it does!” So in the end, those synth arpeggios – dah dah dah dah dah – she’s there opening and closing it. We also got her to speak Japanese on “Ottawa to Osaka”.

NT: So, did she get a keys credit in the end?

CP: I think she did!

NT: You did an Ask Us Anything on Reddit, and Caroline, you talked about your approach to writing melodies; through fantasy, by accident, and using expressionism. I thought your description of the last method was fascinating and was wondering if you could talk about that a little bit.

CP: Sure, well imagine you’re holding a pencil and instead of trying to draw a picture that describes how you’re feeling, you just make a movement to describe how you’re feeling. Whatever’s left on the paper is “that”. For me, that’s part of expressionism. You’re not thinking about what the end product is as a composition; you’re just emoting, and then that’s the result… I guess the idea is that you’re focusing in on a feeling. It’s the first time I’ve been really sort of working that way. Like on “Polymorphing”, it’s really about fun. But then songs like “Unfinished Business”, that feeling of scratching my voice… I didn’t think about it before doing it. It just came out of the emotion I felt; the feeling of being gutted, by missing someone.

I think as humans, we can all relate to each other on a body-level and those kinds of things really translate. It’s just been something I’ve been playing with more.

NT: In that same AUA, you also talked about getting outside your comfort zone; to get beyond your limits and become fearless about it. If someone asked you for advice on how to build that confidence, what would you say?

CP: Well it’s two things: you have to, first of all, acknowledge your experiences as legitimate, no matter what; and second, you have to surround yourself with people you trust. If you’re not doing either one of those, it can’t happen. I’ve been working with [Patrick] for ten years now… I can trust him. (laughs)

NT: Throwing back to ’08, one of your first big singles was “Bruises”. About the song, Caroline, you’d made the comment:“I don’t like the idea that an artist has a responsibility to repeat themselves, like that song made you happy so we have to make you copies.” Was that mostly a reaction?

PW: Even on that record, there weren’t that many songs quite like it. On all of our records, the songs, they all live in like a world of their own, and we’re both more excited about doing something new.

CP: There’s a climate online, especially with comment boards – YouTube’s the worst, but there’s other platforms where it’s bad too. People talk to artists as if they’d paid for a subscription service and they’ve been promised something. (laughs) Like a guarantee has been signed.

If artists never tried anything new, you wouldn’t have gotten that thing you liked in the first place. Everything good comes out of risk and change. It’s not as if we’ve ever had a phase where we’ve done the same thing. With every record, we’re always experimenting. I think that’s one of the reasons why we’re kind of polarizing, even as a band within our own fanbase. A lot of people, even more so than with “Bruises”, were really hung up on our last record.

PW: Now that we’re three records in, I’ve noticed that a lot of our fans are a lot like us, and they like a lot of different things. Hopefully what people are attracted to about our music is that you don’t know quite what you’re going to get.

CP: The whole thing actually makes me more excited to make another record, because a narrative’s starting to come out. I think it’s rewarding both for us and for the people who are listening to the band, to follow along.