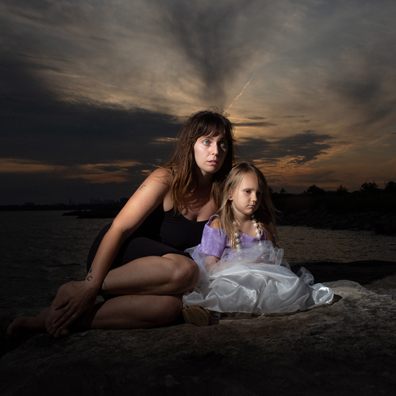 Heavy Light, the seventh album from U.S. Girls, takes its name from a quote in Franz Kafka’s The Zürau Aphorisms: “A faith like an ax. As heavy, as light.” The book, written while Kafka recovered from tuberculosis, are Kafka’s religious reflections, and present an interesting comparable as U.S. Girls have crafted an album with spiritual overtones and seriousness U.S. Girls is the work of Toronto’s Meg Remy but Heavy Light is expansive featuring some 20 session musicians and tracked live. The result are songs that are surprisingly deep, but not necessarily grand, often built around disco-inspired grooves, with vocals refracting light all over the album. It gives the record the feeling of an idiosyncratic religious ceremony.

“State House (It’s a Man’s World)” grows out of a slow handclap beat. Remy’s voice leads a chorus of female singers giving the song a gospel feel. Sonic textures float into the song shortly before it concludes in less than two minutes, perhaps the world’s shortest worship service set. It’s certainly less secular than the same version of the song that appears on 2011’s U.S. GIRLS on KRAAK. “Born to Lose” is more of a soul pop song, built on what sounds like bongos, but given a gravity thanks to a mixed-gender wall of background singers. Remy voice is powerful, alternating between playful and intense.

“Woodstock ’99” is surprisingly straight-forward. Featuring a pretty piano line, one could imagine it being sung at a very specific kind of wedding. In many ways, it’s one of the most compelling tracks on the record, as it’s really just Remy showing off her vocal and songwriting talents, without any of the more experimental sounds that tend to float through her albums. As if to correct that oversight, the track immediately afterwards, “The Color of Your Childhood Bedroom,” is 27 seconds of recorded cross-talk, either a sonic collage, an aural palette cleanser, or an outtake from “The View.”

While I take the accompanying publicity material at its word that Heavy Light draws its title from Kafka, I can’t help but think of Led Zeppelin, and how Jimmy Page, the architect of their sound, often described it as “light and shade.” It was a reference to Page’s art school training, where he learned about the importance of intent and structure in visual art. Just as great paintings weren’t thrown up onto a canvas in one single take, great music needed similar planning and forethought. Remy has created something smart and deliberate, using seemingly light pop conventions and figuring out how to bring out their depth and heft. The live recording was a smart move, allowing the performances to come before the production, with everything reconciled at the end, sort of like a painter sketching all of a work’s characters separately before assembling them onto the final work. There’s always beauty in contrasts.