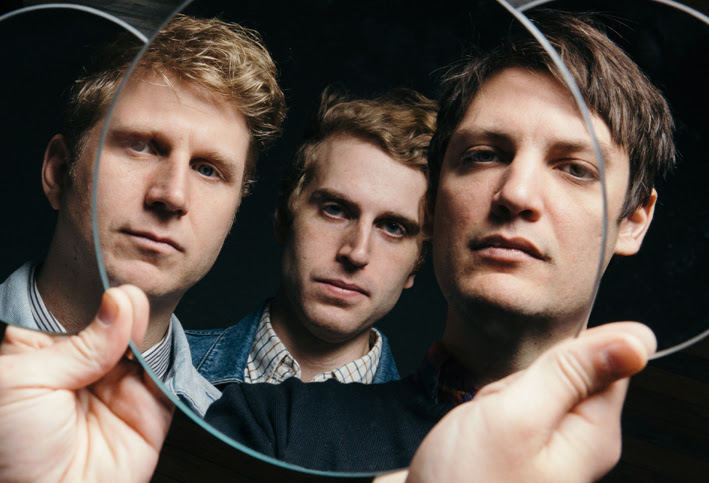 Grooms recently released their new LP Exit Index. Yesterday, the Brooklyn banded reveal the latest video from the album for the track “Softer Now”. It was directed by Edmond Hawkins who is responsible for much of digital FX for SNL . Grooms explain, “Edmond, after listening to the song, but not knowing what it was about, had this idea of someone being messed with by crowds of people, but you don’t know why. Or at least, he didn’t tell us. The vague menace of that worked really well with the song, and the album in general really. He made the mask himself. Out of what, I’m not sure.”

Grooms is singer-guitarist Travis Johnson, drummer Steve Levine, and bassist Jay Heiselmann. On Exit Index the band combines the abandon of pop with the unease of American life in 2017, cloaking its hooks in a clamor of samples and distortion, its agitation expressed in its dream-poetry lyrics.

Grooms laid down the skeleton tracks for Exit Index at the storied New York recording studio The Magic Shop-the last band to record there. Collin Dupuis (Angel Olsen, Lana Del Rey) mixed the album, adding a few finishing touches to intros and song structures while also making the structures Grooms construct sound even more massive and imposing. Exit Index marks the first time Grooms had the same lineup for two records in a row and Johnson further notes, “you can hear how locked in we are. The songs are better after we all have a say in them.”