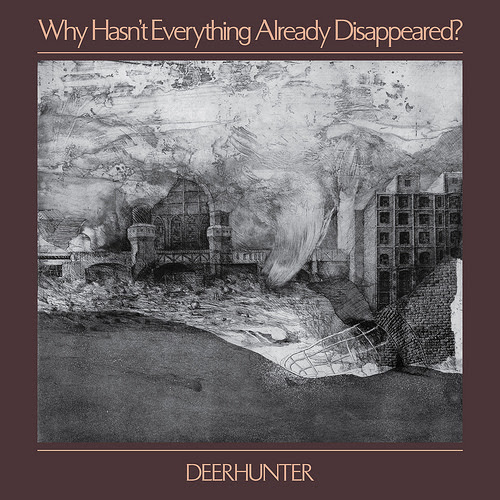 Deerhunter 'Why Hasn't Everything Already Disappeared?'
Share on TwitterShare on PinterestShare on PocketShare on RedditShare on FacebookShare on Email

Deerhunter has announced their eighth full-length Why Hasn’t Everything Already Disappeared?, the album arrives on June 18th via 4AD. Along with the news the band has shared a new video for lead-track “Death In Midsummer.” Deerhunter will also hit the road, for a run of dates, starting November 4th in Sao Paolo, Brazil.

From the opening harpsichord and piano figures of “Death in Midsummer”, it is impossible to tell where the record came from. Is No One’s Sleeping an outtake of an aborted Kinks recording session in 1977 Berlin with Eno producing? No. That is nostalgia. If there is one thing Deerhunter are making clear it is that they have exhausted themselves with that toxic concept.

Caption of photograph found in book: “Revolution In The Streets of St. Petersburg, July 1917.” The photo shows figures of people running away from piles of bodies.

On 16 June, 2016 Labor Party MP Helen Joanne Cox died after being shot and stabbed multiple times in Birstall by Thomas Mair, a mentally ill man with ties to a Neo-Nazi organization He shouted “Britain first” as he carried out the attack.

An architectural interlude for synthesizer and drums.

Elegy for Ecology (a landscape done in toxic watercolors)

A postcard from the slipstream

A walk through Europe in the rain

James Dean spent the Summer of 1955 in Marfa, Texas filming “Giant,” before his death on September 30th.

Live stream from the afterlife.