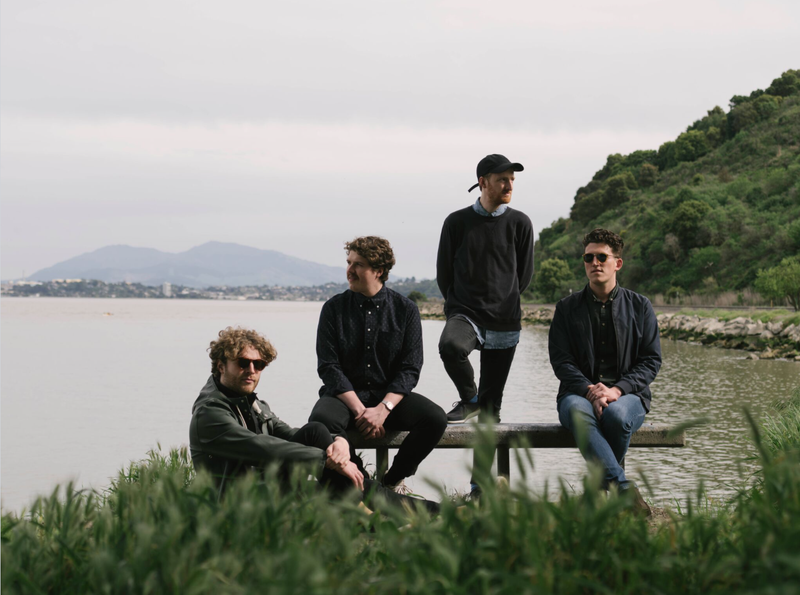 Years down the line from their stunning debut Dandelion EP, Cloud Castle Lake has gone from a trio to a quartet. The jazz-infused psychedelic band has continued pushing their sound in weird directions, even ballet for that matter. We caught up with band members Daniel McAuley and Rory O’Connor on the heels of their new songs “Twins” and “Bonfire” talk about their upcoming record and how their creative process has resulted in their more experimental sound.

Northern Transmissions: How did Rob Kirwan get involved with you guys and what did they bring to the recording process?

Daniel McAuley: Well we worked with him on our first EP, we recorded it and he mixed it. I think Rory you had first the first contact with him.
Rory O’Connor: We contacted him first and he really liked “Sync” so he wanted to work with us.
DM: We really enjoyed that process and working with him in his studio. When it came time to do the album, we wanted to do it with him in his studio from the beginning. The first experience was just so fun.

NT: You’ve talked about running every song through myriads of arrangements and different instrumentations, are most songs dramatically changed because of this and does it make your writing take much longer?

DM: In our experience, when you try chords and melodies through loads of different instruments or styles, you can find out more about and find out new ways to take it. That’s always a fun process when we’re writing.

NT: Do you think this is why tracks like “Bonfire” end growing into these extended epics?

DM: I think with “Bonfire” it started off from a simple place, and we’d always built it quite literally. So every section had to build on what came before and that led to those epic sections.

NT: Where did the idea to involve Tonnta for the choir vocals on “Bonfire” come from?

DM: I think we knew early on that we wanted to get a choir on it, we were trying to think of what group would be best. We knew Tonnta and had heard their music online, but we knew Robbie Blake who runs Tonnta and we thought he would be great to work with.
RO: They’re quite good improvisers as well. We knew then that there were broad possibilities. Writing the album we knew we’d have jazz style drumming and some other jazz elements, so we figured the choir would offset that in a really interesting way.

NT: How did you start working on the score for Ballet Átha Cliath, and how did you want to approach it differently from your albums?

DM: Dublin’s a pretty small place, so everyone knows each other. Howard who runs it knew our music. The aim of that project for him and the choreographer Zoe was to expose people to a more modern and exciting version of ballet than they were used to. They wanted music that was a bit more modern and could be a love letter to the city as well. The name comes from the Gaelic name for Dublin, Baile Átha Cliath, so there’s that as well. We were writing the music to the dance, so it had to complement the movements that were there. It felt backwards nearly, but it was a really nice challenge to work around that.

NT: Is there anything you pulled from that experience that’s going on the new record?

DM: We did it just after we had just finished recording and mixing the album. So there was that period after where you’re kind of antsy and you’re dwelling on what you could’ve done differently on the album. This was a welcome experience to do something different than the album, so it was really welcome.

NT: How has Brendan Doherty’s drumming shaped the new record compared to your previous releases without him?

DM: We started off as a four-piece in school together. We’d played with our original drummer James in various bands when we were all learning to play. When he left, we went through a bunch of different drummers. It was a good experience for us to be able to work with so many musicians. We met Brendan and he had just finished at jazz college, so we were lucky that someone put him in contact with him.
RO: His ability as a musician put a massive amount of creativity into the drums. There was no limit on what we could do with him. In that way, it didn’t shape the music but it opened out a big pot of possibilities to try.

NT: With your patience to make sure you had the right timing and support behind your previous effort, what made you decide on Bright Antennae for a label?

RO: They found us, and we had been looking elsewhere but nothing came to light. They really wanted to work with us, and they’re really nice and accommodating. We wouldn’t have been able to achieve what we wanted to achieve on the album without them.
DM: They gave us the ability to make the record we wanted.