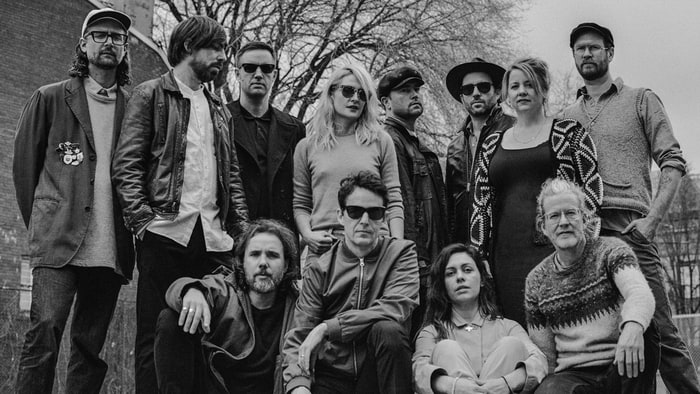 For Andrew Whiteman, playing in Broken Social Scene is like visiting old friends.
Share on TwitterShare on PinterestShare on PocketShare on RedditShare on FacebookShare on Email

For Broken Social Scene’s Andrew Whiteman, the political is personal. The multi-instrumentalist is one of the only band members to appear in every one of the band’s tours, and he’s been one of the key players in the band’s return from a seven year hiatus to release their new album Hug of Thunder. The LP is a grab bag of everything the group does well, and it’s easy to hear how close the band members are to one another by how natural it all sounds.

In our interview, Whiteman talks about collaboration in the studio, how the record reflects our political landscape, and what it’s like for the band to regroup after almost a decade apart.

Northern Transmissions: Hug of Thunder is such a great name for a record. Where’d that come from?

Andrew Whiteman: That was Leslie [Feist], actually. At some point during the creation of that song, we were asking her what the song was called, and I guess that’s what she decided. We had our chalkboard of possible album names up, and that one just went to the top of the list and just kind of stayed there.

NT: So you’ve gotten the whole band together for this album, which must have been difficult to schedule.

AW: Yeah, scheduling is tricky. I think we’re really good at it, and the proof is that we made it happen, which is really hard to do. But there’s also a will. Once the ball got rolling with the core [members], everyone else really wanted to chip in too. The vibe was positive.

NT: I read in an interview that Kevin Drew said you guys got together again because of the attacks in Paris.

AW: Well, that might have been heavily on Kevin’s mind. From my perspective it’s more — the fact that I live in Montreal, that’s a big change for me from the last time. But I’ve never not been around those guys. We’re just friends. Whether we’re making music or not, I still know what’s up with Kevin [Drew] and Charlie [Spearin] and Brendan [Canning]; we still make music together, although not as Broken Social Scene. These people are my friends for life, you know? We got together at some point to discuss, ‘hey, where’s everyone at? Do we want to play? How are you feeling, what are you doing, what’s up?’ For me it was much more of a personal, emotional, feely thing.

NT: Is it hard picking it back up after seven years?

AW: Oh my gosh, no, not at all. I mean that’s part of why we’re doing it, because it’s not difficult one bit. From the moment I played with these guys, when I first played with Kevin probably 15 years ago or more, it’s never been an issue. Communicating musically is what we do. It’s a magical thing with this band, and it always has been.

NT: You also play with other bands and musical acts. Do you find that work inspires what you do in BSS?

AW: Well, during our hiatus, as a guitar player, I spent a lot of time playing with synthesizers in my time off like every other guitar player in the past 10 or 15 years. You start to play with synthesizers and analogue stuff, do drum machines and drum programming. That’s where I was at. So when we started making music together again, I just brought that gear along with me. That’s part of my contribution to the new record and the new music. Everyone else did that in their own way, too.

NT: What was the writing process like for the record? That’s a lot of cooks in the kitchen.

AW: I mean, you have a band of six producers, and then you have a producer on top of that, and then we have a brilliant engineer named Miles Spencer. For this record, we just let the process guide us. It sounds like a cliché, but it really does work that way for us. It’s a big block of wood, and you just chop away and see what comes out. Everyone else has their bits and pieces.

We’ve been together so long, and we’ve made so much music together, our chemistry is very strong. If you’re not feeling something, you back off. If someone else really has a vision, they go and they go, and if they catch a big wave that’s great, or they go for as long as they go and you hit it off like a relay race. Sometimes you find yourself allied with one person and you’re really in the flow with them, and then two weeks later you bring the song up and you two are at odds, you say ‘nah, it should go this way,’ and then you have new allies, and then that changes again.

Really, this record is a pretty accurate portrayal of this moment in time, for us personally and for what we’re dealing with as a country, politically, and as people.

NT: Could you speak a little more to how the record relates to politics, what’s going on in the world?

AW: You transmit the world through yourself, the world is a mirror for yourself. You can’t help but see one in the other. When I look out into the world, I see myself. And with everyone in the band, a lot of growing up happened, a lot of growing old happened. If I think of movies, Humphrey Bogart movies, those are grown ups in those movies. They’re dealing with grown up situations. Having a good time is not the end game in that situation, it’s kind of gritty. And I feel like our world situation is really gritty right now.

You can escape into a smooth buffered zone, some kind buffered self-medicated zone, and it’s really easy. We’re all absolutely addicted to being attention deficit, it’s become a norm now. We’re all subject to it, we all propagate it, we all love it. But we also know that something’s fucked up about this, something’s inherently wrong with being so disconnected from the grittiness you see on your screen, that you hear about, that you read about.

How did that affect the album? We’re just artists, that’s what we do. As Ezra Pound, my favourite poet, told us: artists are the antenna of the race. We’re supposed to be doing our job by being in sync spiritually, intellectually, emotionally with those people who are on the front lines doing the grit work. I think we’re all trying to do that, and I think somehow that comes out. You have to believe it, and it can’t be analysed, it can’t be formulated, you just trust it.

NT: Would you say that there’s a central theme to the album, something that you guys are trying to get across?

AW: No, I can’t say that. I’ll leave that for others to say. I just know that we have something like 40 songs — some are smaller pieces, and some are finished and on the album. I didn’t collect them, I wasn’t the one that collected the songs to be on the album. Turning back to your question about many people being producers in their own right, perhaps if it was my album, if they said ‘Andrew, we want you to choose what songs will be on the album,’ it might have been a very different record.

There’s a lot of songs that are still sitting in the vault, fragments and pieces, and those are part of the story, too. For whatever reason, the 11 songs on the album are the ones that we decided to put out, we decided to call it that, we decide to create our personal Hug of Thunder.

NT: There’s a lot of different styles on the album, from hard rock to pop to ballads. Does that happen naturally, or was it a conscious decision?

AW: That’s just us. When we put out You Forgot it in People back in 2002, we thought that beyond our fan base in Toronto, no one’s gonna really dig this because it’s just what you said, it goes all over the place. But that’s just what we do. The musicians that I work with in that band are monsters of mood, and monsters of style. We can go many many places. That’s what we’ll do, we’re music fiends. Everything has to be played.

NT: You mentioned how you’re all still friends. Do you think the band will still be together another seven, ten years down the road?

AW: Absolutely. As long as I can play with them, I will. I played a lot of music before I was with these guys, but you know it when it’s real. It’s like with my wife, I met my wife and I knew. I had been around the block, and I met her and thought, I know what this is. It’s kind of that way with Broken Social Scene, too. I still remember my first rehearsal.

NT: Is there anything I didn’t ask you about that you wanted to bring up?

AW: If I’m given the privilege to have some of my words in print, that someone’s going to read on the screen, what I want to do is shout out. I want people to take a look at the Leap Manifesto, it’s a political movement started by social workers, indigenous leaders, water keepers like Maude Barlow, authors and activists like Naomi Klein. It’s a manifesto for Canada, and we really want the NDP to adopt it as their official party line.

It’s a way into the future, as opposed to digging the future’s grave.