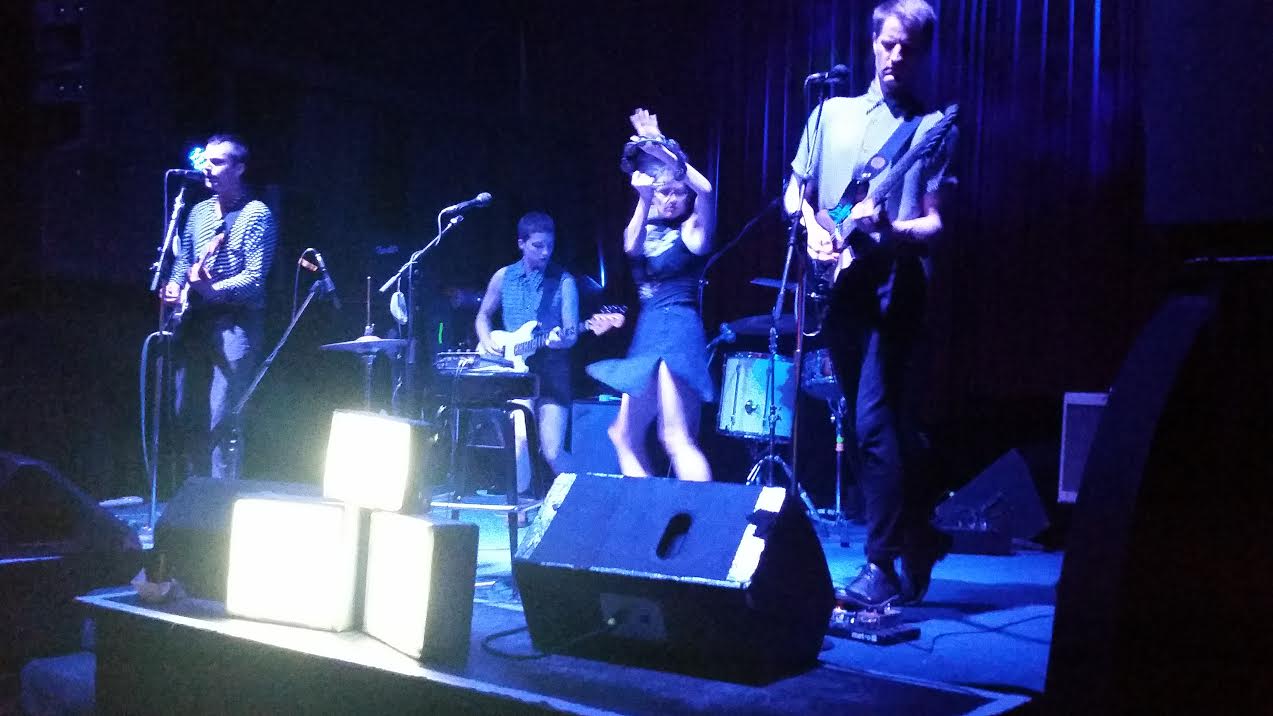 Bodega live in Vancouver, BC
TwitterPinterestPocketRedditFacebookEmail

The mixed crowd at Bodega’s show at the Fox Cabaret last night (August 14) led to surprising results. Obviously, some people went for the New York City post-punks. But it was also clear that some went for the Rambling Derelicts, and some went for the Ford Pier Vengeance Trio.

The Rambling Derelicts left their mark as much with choice words as with rubber-burning garage rock. Between songs, the Vancouver four-piece’s primary singer warned the crowd to “watch out for those fucking tough guys.” No doubt, the “tough guys” included those who sat out the band’s set. “I’ve seen fucking 14-year-olds dance harder than you fucking 30-year-olds,” he said at the end of their set. “We’re way past 30,” someone retorted.

The Rambling Derelicts’ coterie, who all looked to have been in their early 20s, dotted the dance floor and shook and wobbled their limbs and necks. But they stepped outside during Ford Pier. That’s not to say the Vengeance Trio didn’t have devoted fans, though. Ford Pier, who leads the group, is a local staple. He has been a member of legendary punks DOA. He has also collaborated with Neko Case, John Mann, the Rheostatics, and more. Pier is also an experienced composer. All this experience manifested as a stuttering, jerky mix of alternative punk rock and light folk-inflected balladry that even incorporated spoken word. The trio blasted out speeding but brief riffs over deadly drum fills and broke into unexpected harmonies.

How Bodega play their songs live depends on the crowd’s energy. So, the openers’ static and/or sparse crowds did not bode well for anyone. But it didn’t take Bodega long to seize control. “How are you ding-dongs doing?” singer and guitarist Ben Hozie asked after the band opened with “Boxes for the Move.” “Can I be obnoxious and ask everyone to move forward? I promise it’s going to be a lot more fun.” His promise came true especially for one fan who fell down drunk throughout their set. Her dance radius spanned the entire floor.

Some of Bodega’s best songs were the ones led by Nikki Belfiglio, like the ass-wiggling  “Gyrate.” Glowing thumper “Margot” showcased her and Hozie’s vocal call-and-response. Bodega changed the pace with the sentimental “Charlie.” The song is Hozie’s tribute to his best friend who drowned in the Charleston River on New Year’s Eve in 2007. But Hozie had to stop to tune his guitar. “Charlie’s looking down and disapproving,” he said jokingly. The respite did not last long, though. He put down his guitar so he could put his whole body into “Name Escape.” Madison Velding-VanDam pulled and bent his guitar strings in every direction over bassist Heather Elle and drummer Montana Simone’s hypnotic rhythm.

Bodega continued ramping up during the second half of their set. “Williamsburg Bridge” ended in a scathing climax. The stiff 30-plus-year-olds could have thrown out their backs to “Bookmarks.” Final blowout “The Truth is Not Punishment” tunneled through patches of insane riffage and angular guitar noise. Hozie and Velding-VanDam dissected their strings. Again, Elle
and Simone tempered the jam’s ebb and flow. Hozie jumped back in with vocals before the band rode a final tidal wave of discord.

Bodega criticize learned toxic masculinity, addiction to technology, and social detachment, with wry humour. Yet their commentary, like their music, is to the point. The band were lively onstage, though. Belfiglio twirled and whipped her arms while she hammered on a cymbal and tambourine with a single drumstick and commanded the console that produced computerized
vocal clips. “This is new Bodega song.” “I use my computer for everything. Heaven knows I’m miserable now,” the voices announced. Hozie and Velding-VanDam propped themselves up on their monitors and shredded over the crowd’s heads. Elle and Simone resigned themselves to the rear of the stage, though.

In an unexpected twist, the Rambling Derelicts’ fans stood still for Bodega. But some of their elders danced harder than 14-year-olds. Generational contentions and perplexities aside, every band killed on the inhomogeneous lineup. The night was slightly strange but wholly enjoyable.