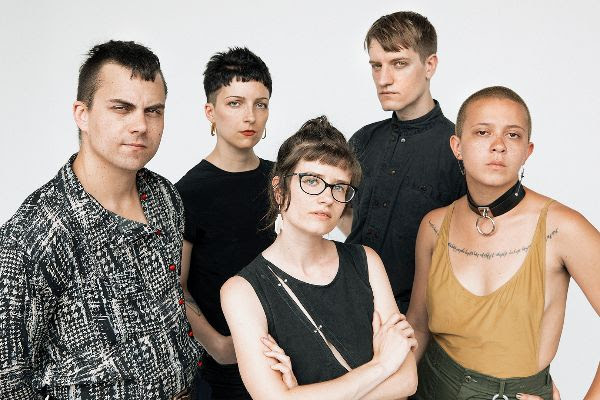 BODEGA, have dropped, Knife On The Platter, the new single off their forthcoming release Shiny New Model, due out October 11th via What’s Your Rupture?.

“‘Knife on the Platter’ is a narrative song : I was imagining a top notch Gena Rowlands-esque actress who is cast in a mediocre gothic who nonetheless elevates the script’s schlocky material through her absolute commitment to authentically live each moment of the play,” says Ben Hozie. “She performs as if the gods are watching – she ‘acts’ as if each gesture will be set in stone for the future to see. That’s a show business trick – when performing imagine your heroes are in the room. You will no longer mess around. Twice in the song Zeus responds via the lightning striking from Madison’s guitar. That’s the thing: even when you are totally alone and lost – someone is (or will always be) watching your actions. Choose wisely.”

The band will tour across North America, kicking off next week at O+ Festival in New York. All dates can be found below and tickets are on sale now.

1. Shiny New Model
2. Treasures Of The Ancient World
3. No Vanguard Revival
4. Knife On The Platter
5. Domesticated Animal
6. Realism
7. Truth Is Not Punishment